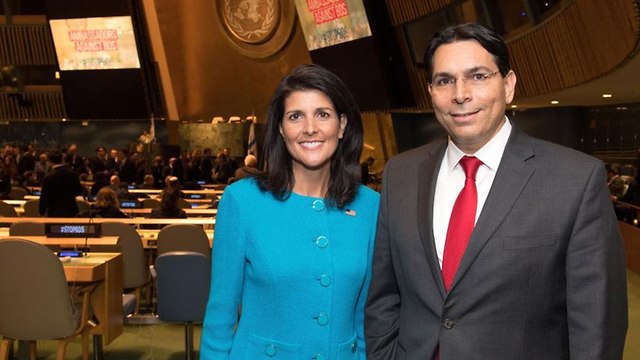 US Ambassador to the UN Nikki Haley is expected to submit a draft resolution at the United Nations General Assembly, harshly condemning the Hamas terror organization.

Haley, who will be leaving her position by the end of the year, is promoting a resolution condemning Hamas's rocket fire at Israel and incitement against it, as well as demanding to halt any violent activity, including the launching of incendiary balloons from Gaza into Israel.

An additional provision in the draft obtained by Ynet and Yedioth Ahronoth, focuses on Hamas terror tunnels and calls on the UN to condemn the terror organization's use of civilian resources for military purposes.

Haley is cooperating with Israel's Ambassador to the UN Danny Danon, and has met over the past two days with world envoys in order to raise support for the American draft.

Danon thanked Haley for her support of the Jewish State. "The efforts and diplomatic activity to promote the draft resolution condemning Hamas stresses Haley's steadfast support of Israel.

"Through joint efforts we have managed to change the hostile approach against Israel at the UN. Now the time has come to recruit the world to join us in our fight against terror," the Israeli envoy to the UN added.

"Hamas is a deadly terror organization, which must be dealt with on all fronts, and especially in the diplomatic arena," he concluded.

On Friday, the US opposed for the first time an annual draft resolution at the UN calling on Israel to rescind its authority in the Golan Heights, drawing praise from Israeli officials.

The US has abstained in previous years on “Occupied Syrian Golan” resolution, which declares Israel’s jurisdiction in the area “null and void”, but Haley said on Thursday that Washington would vote against the resolution.

“The United States will no longer abstain when the United Nations engages in its useless annual vote on the Golan Heights,” she said in a statement.

“The resolution is plainly biased against Israel. Further, the atrocities the Syrian regime continues to commit prove its lack of fitness to govern anyone,” she added.

Despite the US opposition, a UN General Assembly committee approved the draft resolution with 151 votes in favor and 14 abstentions. Only Israel joined the United States in voting no. The General Assembly is due to formally adopt the resolution next month.