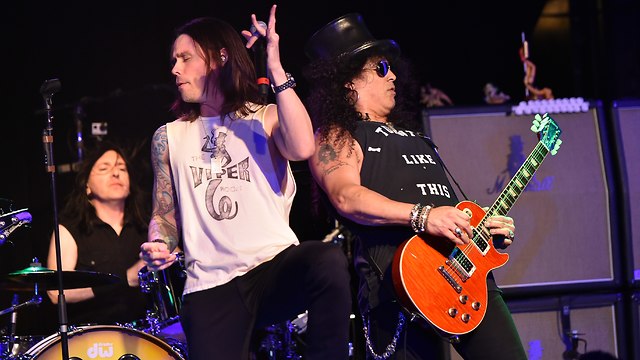 Slash to perform in Tel Aviv next summer

The legendary Guns N' Roses guitarist is expected to return to Israel in July 2019 as part of a promotional for his new album with Myles Kennedy and The Conspirators.

Two years after performing with Guns N' Roses at Tel Aviv's Yarkon Park, the legendary guitarist Slash announced Sunday he will return to perform to the Israeli crowd next summer.

The show is expected to take place on July 9, 2019 at the Tel Aviv Fair Grounds, where Slash will share the stage with his bandmates from Myles Kennedy and The Conspirators.

The concert—which is produced by Shuki Weiss Shai Mor-Yosef and Guy Besser from Live Nation Israel—will be part of a promotional tour for the band’s "Living the Dream" album.

Saul Hudson, 53, received the nickname Slash from a family friend because of his incessant movement and inability to sit still. At the age of 14, he formed a band that, although didn’t last for very long, pushed him to pursue musical studies.

A few years later, Slash joined Axl Rose's band, and a short while later they formed Guns N' Roses together—which went on to become one of the biggest bands in Rock and Roll history.

It is often difficult for guitarists in popular bands to play a dominant role alongside the lead singer, but that wasn’t the case for Slash. His virtuoso level of guitar playing and his charisma helped him become a legend and a role model for all guitarists around the world.