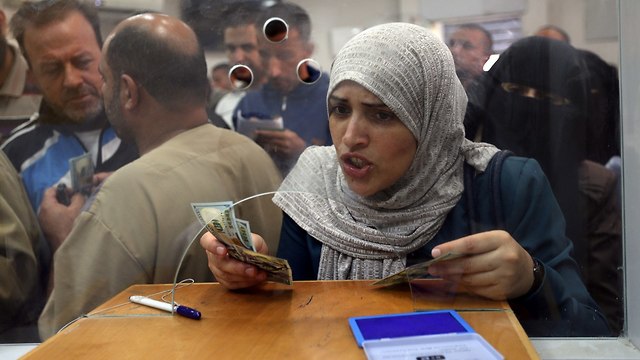 Petition urges the High Court of Justice to order the state to prevent the second installment of Qatari aid from being transferred to the strip until it can be guaranteed the money won't be used to fund Hamas's terror activities.

A group of Israeli mothers from communities located near the Gaza border petitioned Monday the High Court of Justice (HCJ) to halt the second installment of $15 million in Qatar funds from being delivered to 30,000 Hamas officials in the Gaza Strip.

Last month, amid Egyptian mediation aimed at reaching a long-term agreement between Israel and Hamas, three large leather suitcases containing $15 million in cash entered the coastal enclave in order to pay the salaries of Hamas public servants. Additional funds are expected to be transferred in the coming months.

The purpose of the petition—which was submitted through Shurat HaDin, a civil rights non-governmental organization—is for the court to issue an interim injunction ordering the state to either completely stop the transaction or to postpone the transfer of the second installment scheduled for next week.

"This money should not be transferred as long as Gaza is ruled by the Hamas terror organization, or as long as there are no guarantees that Hamas won’t use the funds to escalate their terror activities," stressed the petition.

The first money transfer was plagued by irregularities (for instance the use of suitcases to transport the funds) making it impossible for Israel to guarantee that the money reached the right recipients.

The residents of the Gaza border communities wrote a letter to Prime Minister and Defense Minister Benjamin Netanyahu, calling the transfer of Qatari aid “extremely unreasonable and blatantly illegal." The Prime Minister’s Office so far has not issued an official response to the letter.

Maya Ackerman, from Kibbutz Or HaNer, was one of those who signed the petition.

"It is inconceivable that while our children are being targeted by rockets, the Israeli government is handing out Hanukkah presents to Hamas," Ackerman vented.

Nitsana Darshan-Leitner, the president of Shurat HaDin, emphasized that the first installment of Qatari money had been immediately followed by a round of escalation on the southern border, which saw nearly 500 rockets launched at Israeli cities.

"The last time the government transferred $15 million to Hamas … it got 500 rockets in return," she stated.