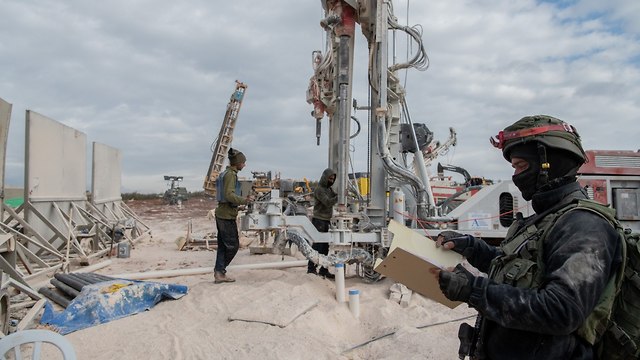 Senior IDF officials say they've known about the tunnels along Israel-Lebanon border for more than two years but waited until plans for Operation Northern Shield were finalized.

The IDF's decision to launch Operation Northern Shield to neutralize Hezbollah terror tunnels this week stemmed from a growing fear the underground infrastructure would be used by terrorists to carry out attacks against IDF patrols in the area, according to a senior commander of the 91st Galilee Division.

"For two and a half years, we have been certain that there are tunnels, but the element of surprise was very important to us," the commander stressed Wednesday during a tour of the Metula area where one tunnel was uncovered.

According to senior officials in the Northern Command, Hezbollah’s plan for the next war with Israel involved infiltrating Israeli territory through the tunnels, ambush the IDF forces that would be sent to the area, paralyze Route 90 leading to the city of Metula and isolate the area so the main Hezbollah force could invade unopposed from Lebanon.

"We were debating when to uncover the tunnel," explained the senior officer. "Should we save it for war time or not, but my position was not to wait," he stated.

The officer underlined that the operation could continue for a long time and that the IDF is prepared to deal with any possible scenario.

The IDF's plans for Operation Northern Shield were finalized a year ago but had been kept under wraps.

The few officers entrusted with planning the operation worked in conjunction with the Gaza Division to study the methods to locate the tunnels, but at a certain point it became clear that a different approach would have to be adopted in light of the different geological conditions in the north, that include rocky terrain as opposed to the sandy soil of Gaza.

At this point, the tensions in the north have subsided. Senior political and military sources say Hezbollah had been left surprised and embarrassed by the Israeli discovery of the tunnels.

"They don't know exactly the extent of our knowledge on their tunnel project or their plans, but we know a lot," a senior military source emphasized.