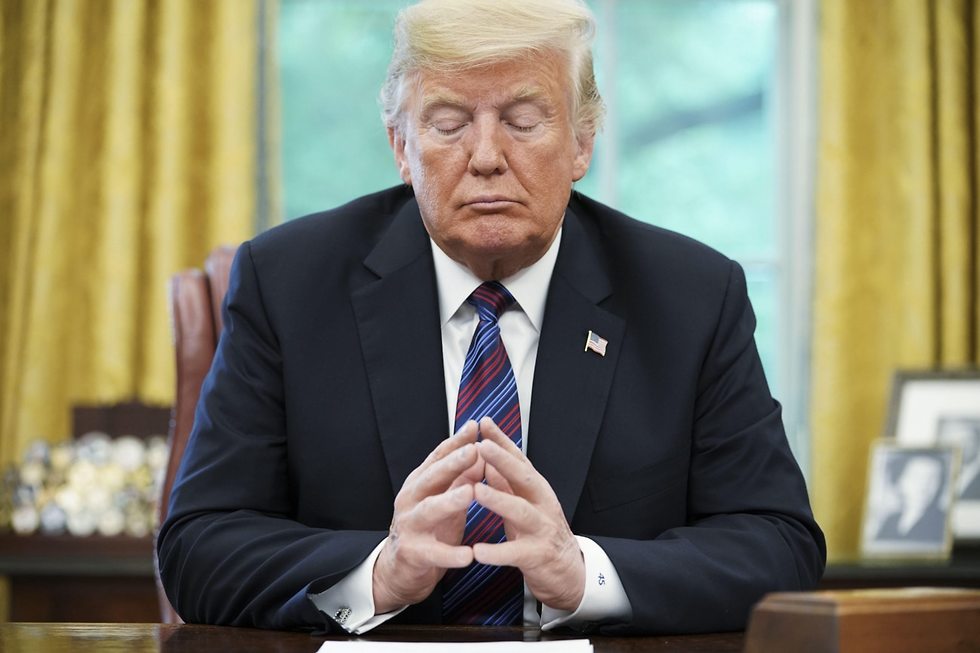 Op-ed: The US doesn't know how to properly take advantage of Iran's pressure points. It's time Washington neutralizes the Islamic Republic's proxy—Hezbollah—by demanding Beirut to force the Shiite organization to disarm and renounce its heavy weapons.

As expected, the US gave its full support for the IDF's Operation Northern Shield, which was launched on Tuesday to expose and neutralize the terror tunnels Hezbollah has been constructing along the Israel-Lebanon border since 2006. But the American aid is much more crucial in a far more important issue.

A month ago, US President Donald Trump posted a dramatic statement on Twitter, as he usually does, about the resumption of sanctions against Iran.

"Sanctions are coming," Trump posted as a meme on his official Twitter page, in a homage to TV show "Game of Thrones."

This statement reflected a determined American position: the main goal is to prevent Iran from making profits, which in turn are used to fund terrorism, among other things. It is entirely unclear when and to what extent this US policy will be effective. The American move's weakness stems from the fact that most of the signatories of the 2015 nuclear accord oppose the American stance, believing it to be motivated by the fact the pact was signed by Trump's predecessor, Barack Obama.

Is direct pressure on Iran necessarily the most effective policy? I'm not sure, but in my opinion, the US does not know how to properly take advantage of Iran's pressure points.

Iran is investing efforts in establishing presence in Iraq, Syria, and Yemen. However, it is Lebanon that has been under the Islamic Republic's control for years through its Shiite proxy—Hezbollah.

Lebanon's elected president, prime minister and parliament have control only over the civil activities in the country, whereas the significant military power lies only in the hands of Hezbollah. Therefore, it is about time for the US to present Beirut with an ultimatum: if it wants to continue being seen as an independent country, it must demand Hezbollah to demilitarize and renounce its heavy weapons.

If Lebanon refuses, the US would boycott it along with any organization that would agree to do business with it. This would be a difficult dilemma that would rip Lebanese society from inside, which could lead Lebanon to make the right decision.

There are five reasons to why Lebanon may renounce Hezbollah, the first of which being the fact that even though the Shiite Muslims are the biggest sect in Lebanon, they are not the majority. The second reason is that Lebanon's majority—the silent majority— opposes Hezbollah and is justifiably concerned about the destruction that would be inflicted on them and their country if the Shiite terror organization drags them into a military campaign against Israel.

The third reason is that despite Hezbollah Secretary-General Hassan Nasrallah's hawkish statements, the terror organization is facing a severe financial crisis. It must treat Syria's civil war's thousands of wounded, and pay the families that lost their relatives in that war, while its main problem is the obligation to pay the pensions of militants who joined the organization 30 years ago and are now retiring.

The fourth reason is the fact Hezbollah may be under Iranian control, but it is still a political movement, which presumes to also be a patriotic Lebanese movement. The organization would prefer to reach a compromise before dragging the whole country into complete destruction, which will eliminate all political achievements reached in favor of the Shiite population, in which Hezbollah invested tremendous efforts over the past decades.

The fifth reason is that as opposed to Syria, Russia does not have strong interests in Lebanon, and it certainly does not have any interest in empowering Iran there.

The US is able to apply more pressure on Lebanon than on Iran, and this is how it should focus its efforts against the Islamic Republic. Despite disagreements about the nuclear accord, if Washington demands Hezbollah's disarmament, it would gain Europe's support in addition to that of Saudi Arabia and Israel.

Israel, on its part, must stress that if a military campaign is launched against it from Lebanon's territory, it will not only lead to a war against Hezbollah—like we mistakenly did in 2006—but to a war against its patron, Lebanon.