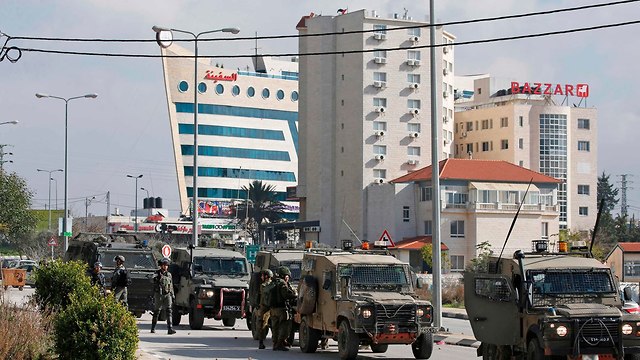 Op-ed: Sunday's shooting attack in Ofra was another piece of the increasingly violent puzzle of the West Bank. But with the Israeli government failing to act and the PA weakening by the day, Hamas is expected to fill the vacuum.

Someone in the political leadershio has an interest in keeping the public's eye on Gaza and its ears on Syria and Lebanon, where one can have photo-ops with soldiers without having to deal with ideological issues. But they prefer to keep the explosive security situation brewing in the West Bank out of the limelight—and they are succeeding.

Ten Israelis were killed and 76 wounded this year in terror attacks in the West Bank, more casualties than both the Gaza and the northern front together. But when such attacks occur, we wake up for just a moment to ask the banal questions—where was the Shin Bet? What happened to the army? Why did they not know? Why did they not prevent it? What happened to our deterrence?—and then we sink back into the deceptive calm.

After every attack, the political echelon generates a flurry of inflammatory nationalist statements, but there is no serious action taken to deal with it. Even when the IDF chief of staff and the director of the Shin Bet security service appear at the Knesset's Foreign Affairs and Defense Committee and warn about the violent abscess waiting to erupt in the West Bank, it only makes the headlines for a day.

The data the heads of the defense establishment present indicate a significant increase in the number of attacks, attempted attacks, and in intelligence on planned attacks in the West Bank. If in 2017 the Shin Bet stopped 148 terror cells affiliated with Hamas, this year it has already stopped 250 such squads—and this is not by chance. Hamas's guiding principle—which Israel has become accustomed to—is to destroy the Palestinian Authority, harm Israel and reach an arrangement for Gaza. In their eyes, there is no contradiction.

Palestinians riot in Ramallah (Photo: AFP)
The greater the number of attempts to carry out terror attacks, the greater the chances that more attacks will be successful. The data shows that the holes in the defense establishment's fishnet have not widened or loosened, but the quantity of fish is much larger. If in 2017 about 400 major attacks (kidnapping, suicide bombings, shootings and explosive devices) were thwarted, this year, 530 such attacks were prevented, each of which could have resulted in dozens of casualties.

Sunday's shooting attack in Ofra is another piece of the puzzle of this increasingly violent picture. In addition to the warnings issued by the head of the Shin Bet and the IDF chief of staff, the Palestinian Authority is believed to be in decline. Not only is the PA on the verge of a power shift, it also has no achievement that it can show its public—and thus it loses street credibility.

The PA is perceived by the Palestinian public as an impotent body that, unlike Hamas, cannot pressure Israel, and the Israeli government is doing everything to expand this trend.

When the PA is weakened, its security services are weakened, and when they lose their power Hamas will enter into the vacuum with full force and fuel the destructive energies that are bubbling just under the surface. The attack in Ofra is just another reminder that will be forgotten by tomorrow.