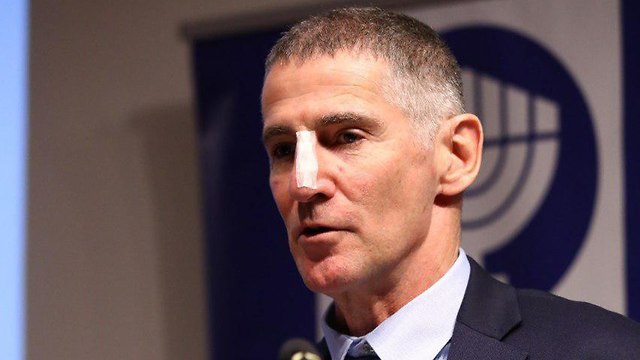 IDF res. Gen.: Israel should be wary Of Gulf states

Israel must approach the Gulf States, including Saudi Arabia, with caution even if they share mutual goals, a former high-ranking Israeli army official stressed at the opening of a conference in Jerusalem titled “New Realities in the Eastern Mediterranean.”

Maj. Gen. (res.) Yair Golan, who until recently served as the Israel Defense Forces’ deputy chief of staff, said that while the thaw in relations with Sunni nations was encouraging, Israel should not let its guard down.

Maj. Gen. (res.) Yair Golan (Photo: Leib Gibing)
“We should be very, very careful concerning the Gulf States,” Golan asserted. “Yes, we can find common interests but we should remember all the time that we really rely on a completely different set of values. We should not over-emphasize these relationships although anything we can do to improve them is very important.” Golan noted that Israel has three main objectives that relate to the Syrian front: namely, to keep the border as calm as possible; to block the transfer of sophisticated weaponry to Iranian proxy Hezbollah; and to curb Tehran’s influence as much as possible. “(Limiting Iranian hegemony in Syria) is a big issue for Israel, but we cannot accomplish this alone; we need the help of the United States and Russia,” he emphasized, adding that the Jewish state should also seek to establish a permanent presence in the Golan Heights. Other speakers at the conference—which featured Israeli, Turkish, Greek and American officials and geopolitical experts and was hosted by the Jerusalem Institute for Strategic Studies and B’nai B’rith International—likewise focused on ongoing regional conflicts. “The biggest change on the ground that’s taken place in the last four years in Lebanon, Syria and Iraq is the shift in the balance of power with regard to the Iranian presence, a process whereby the Iranians have entered each country and created a kind of political military framework of their own as a way to advance power,” Dr. Jonathan Spyer, a Fellow at the Jerusalem Institute for Strategic Studies, told The Media Line. “The other interventions into Syria and Iraq are maybe temporary, but this Iranian project is intended to be permanent.”

Golan speaking at the conference
Dr. Spyer also contends that the Assad regime has emerged as the clear victor in the bloody Syrian war, though the country remains fragmented and its future uncertain. According to other experts present, Egypt, the traditional leader of the Arab world, also faces many security challenges. “(President Abdel al-Fattah al-Sisi) cares about security domestically and in the region, which includes fighting the Muslim Brotherhood, the Islamic State and other terror groups,” Dr. Haim Koren, a former Israeli envoy to Egypt, related to The Media Line. “The other issue which concerns Cairo is Iran, so there is a new situation in which there is an unwritten alliance between Egypt, Israel, Jordan, Saudi Arabia and the Emirates.” Meanwhile, a Turkish politician argues that while many view Tehran as the primary destabilizing force in the Middle East, Iranian representatives should nevertheless be included in regional security talks moving forward. “From a Turkish perspective, Syria is the most important security threat in the region,” Unal Cevikoz, a Turkish opposition parliamentarian and former envoy to Britain, affirmed. Cevikoz, the Deputy Chairman of the Republican People’s Party, concedes that Turkey is increasingly authoritarian in nature and suggests that President Recep Tayyip Erdogan could take advantage of ongoing territorial disputes with Greece in Cyprus to foment unrest. “An unresolved Cyprus problem unfortunately creates a potential challenge for security in the Eastern Mediterranean because it can easily be transformed into an issue to create imbalance in the region,” he warned.