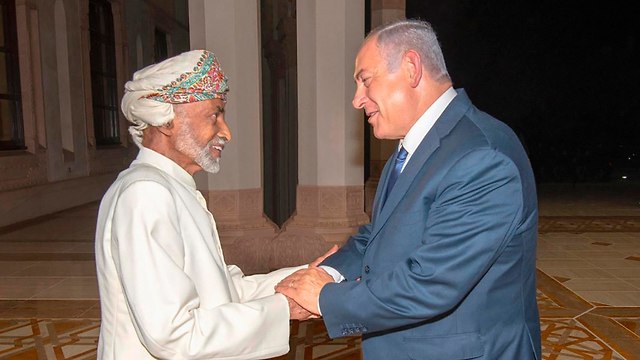 Oman is the only Arab country in the Gulf that could host Netanyahu without fear of destabilizing backlash, thanks to its longstanding policy of non-interference. The prime minister's visit to the sultanate opened the door to additional cooperation between the Jewish state and moderate Arab nations, with the main unifying issue being Iran.

It was a scene unthinkable just weeks ago: an Israeli Cabinet minister, tears of joy filling her eyes, proudly singing her country's national anthem at a sports event in the heart of the Arab world.

The spectacle of Miri Regev singing "HaTikva," which describes the Jewish yearning for a homeland in Zion, was just one in a series of taboo-busting public appearances by Israeli officials in Gulf Arab states that have thrust the once-secret back channels of outreach into public view. Prime Minister Benjamin Netanyahu has for years boasted about warming ties with key Arab states that have no diplomatic relations with Israel. But those ties—still largely unpopular among the Arab public—were rarely visible.
Israeli Anthem played for the first time in the Abu Dhabi Grand Slam    (באדיבות ערוץ הספורט)
X

That changed on Friday, when Netanyahu made an unannounced visit to Oman, where he met longtime ruler Sultan Qaboos bin Said. It marked the first visit by an Israeli leader in more than 20 years to the tiny Gulf state, a US ally that has in the past facilitated negotiations between the United States and Iran.

"These were important talks, both for the state of Israel and very important talks for Israel's security," Netanyahu told his Cabinet on Sunday. "There will be more."

As he spoke, Regev was in the United Arab Emirates with an Israeli delegation at a judo tournament—the scene of her happy tears after Israeli judoka Sagi Muki won the gold medal—and Netanyahu's communications minister was headed to the UAE for a security conference.

Regev visits the Sheikh Zayed Mosque (צילום: חן קדם מקטובי)
Transportation Minister Yisrael Katz, is scheduled to head to Oman next week for a transportation conference, where he plans on presenting his plan for a rail link between Gulf Arab countries and Israel. The driving force in these visits seems to be a shared concern over Iran. Israel and many of the Gulf Arab states consider Iran a destabilizing force, meddling in conflicts and supporting rivals across the region. Oman, which borders Saudi Arabia and lies at the mouth of the Persian Gulf, has often played the role of regional mediator.

Netanyahu meets with Sultan Qaboos in Oman (Photo: AP)
It also provides an opportunity for these Arab countries to curry favor in Washington. President Donald Trump has promised to present a plan for the "Deal of the Century" for Mideast peace, and Saudi Arabia's dependability as an influential conduit has been thrown into question amid the fallout from the killing of Saudi journalist Jamal Khashoggi in the kingdom's Istanbul consulate. Regev's emotional appearance Sunday at the gold medal ceremony in Abu Dhabi was unprecedented and especially remarkable, given her political leanings. At home, she is an outspoken nationalist popular with hard-liners.

In Abu Dhabi, Regev also toured the grand Sheikh Zayed Mosque. Wearing a loosely wrapped headscarf and the traditional floor-length gown known as an abaya, she was warmly welcomed by local officials.

While the visits by Netanyahu and his Likud Party ministers are a huge public relations boost for him domestically, they do not immediately signal an Arab embrace of Israel. The Palestinian-Israeli conflict remains an emotional issue with the Arab public, and relations will likely remain limited without a peace agreement.

Israeli forces have killed over 160 Palestinians during months of Hamas-led protests in the Gaza Strip against an Israeli blockade and a deepening humanitarian crisis. The peace process has been frozen for years, and Palestinian President Mahmoud Abbas cut ties with Washington after the White House recognized Jerusalem as Israel's capital last year and moved its embassy to the city.

The Palestinians fear that Trump is trying to rally support from Saudi Arabia and other Gulf states in order to pressure the Palestinians into accepting a peace plan that falls far short of their demands. In Muscat, Netanyahu's meeting appeared aimed at dealing with the Palestinian-Israeli conflict and his close ties with the Trump administration. With Netanyahu's urging, the US this year pulled out of the Iran nuclear deal, which Oman had supported. After the visit, Oman's Foreign Minister Yousef bin Alawi suggested the meeting was merely a strategic attempt at dealing with some of the Middle East's most pressing issues. In an interview with Al-Jazeera, he said Netanyahu had initiated the meeting to present his views on Mideast issues to Sultan Qaboos. "What Sultan Qaboos is doing now is nothing short of an intervention," said Sigurd Neubauer, a Washington-based expert on Oman. "Oman is interjecting itself into the Israeli-Palestinian peace process for one obvious reason, and that is (because) the Arab states are so divided."

Regev with the president of the UAE's UAE Wrestling Judo & Kickboxing Federation (Photo: AP)
Oman is also the only Arab country in the Gulf that could have hosted Netanyahu without fear of destabilizing backlash, Neubauer said. That's because Sultan Qaboos, in power since 1970, has direct lines of communication with a range of players in the region, thanks to his longstanding policy of non-interference. Oman has brokered the release of Western hostages in Yemen and provided a back door for communications between Washington and Tehran under the Obama administration. It is a member of the Saudi-led Gulf Cooperation Council, but it did not join the kingdom in its boycott of Qatar or the war in Yemen. Even statements by the Palestinian Fatah Party and Iran fell short of directly condemning Oman after Netanyahu's visit, instead criticizing Israel's attempts to normalize relations with Arab states before a peace deal is reached. For Oman, hosting Netanyahu sent a message to the Trump administration that Muscat is a valuable regional player. "The currency is American currency," Yoel Guzansky, a senior researcher at Israel's Institute for National Security Studies, said. "Oman can show that it's a go-between, a conduit not just between Israel and the Palestinians, but more ambitiously between Iran and Israel."