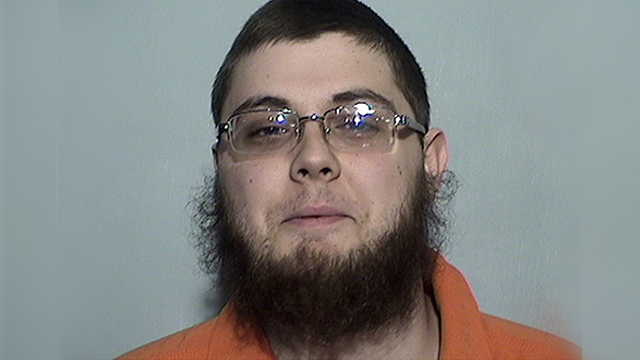 US man charged in plot for massive attack at Ohio synagogue

Federal authorities said Monday they have charged two people involved in planning separate large-scale attacks—one who wanted to carry out a shooting at a synagogue and another who had been plotting to attack a bar and blow up a pipeline.

The attacks were never carried out, and there was never an immediate threat to the public, the FBI and Department of Justice said at a news conference announcing the charges.

Damon Joseph (Photo: Reuters)
The two suspects, both from the Toledo area, had identified specific places they wanted to target, authorities said. The two were under investigation for months and had talked about their plans with undercover FBI agents, according to the Justice Department.

"These cases demonstrate terrorism comes in many forms," said Justin Herdman, the US attorney for northern Ohio.

Damon Joseph, 21, spent months posting photos of weapons, praising the Islamic State group (ISIS) and talking about carrying out a violent attack before he eventually settled on a synagogue in the Toledo area, Herdman said.

His plan for the shooting came together after a gunman killed 11 people at a Pittsburgh synagogue in October, Herdman said. Authorities said he told an undercover agent: "I admire what the guy did with the shooting actually." He wanted to kill as many people as possible, including a rabbi, and make sure no one escaped, the Justice Department said. Joseph said his decision about which synagogue to attack would come down to "which one will have the most people, what time and what day. Go big or go home," according to court documents. Joseph was arrested Friday after he received two AR-15 rifles from an undercover agent and was charged with attempting to provide material support to ISIS. He appeared in court Monday and waived a preliminary hearing, The Blade reported. There was no telephone listing for Joseph and a message seeking comment was left with his attorney. FBI Acting Special Agent in Charge Jeff Fortunato said it did not appear Joseph was working with anyone else. Within months, Joseph became radicalized and began planning an attack, Fortunato said. Court records show that Joseph was charged with domestic violence nearly two years ago and later entered an Alford plea, which acknowledges prosecutors have enough evidence to convict without admitting guilt.

A person pays their respects at the memorial to the victims of the Pittsburgh synagogue attack (Photo:AFP) (Photo: AFP)

Israeli Consul General in New York Dani Dayan expressed his gratitude to the FBI and US law enforcement authorities for preventing the deadly attack.

"I thank the FBI for thwarting the cruel terror attack," Dayan said. "The uncompromising war against anti-Semitism, which is rearing its head, must be bolstered."

He added: "We'll continue fighting anti-Semitism, anti-Zionism and the cruel terrorism, which are meant to make us fear to be proud of our identity."

Authorities also arrested Elizabeth Lecron, 23, of Toledo, on Monday after they said she bought bomb-making materials. She was charged with transporting explosives and explosive material with the purpose of harming others. A telephone listing for Lecron could not be located and court records did not indicate whether she has an attorney. Lecron had been talking about carrying out several different types of violent attacks, including telling undercover agents in August that she and someone else had come up with a plan to commit a mass killing at a Toledo bar, officials said. She also discussed attacking a livestock farm, her workplace and bombing a pipeline, according to authorities, who also said Lecron told agents she was making a pipe bomb.