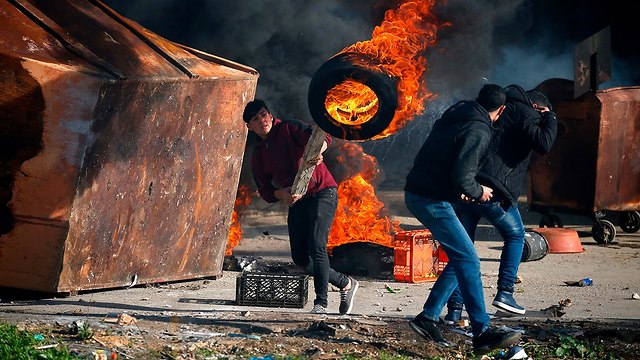 Why is the Palestinian leadership in Ramallah condoning terror?

Op-ed: Granted, the PA wants to distance itself from the image of collaboration with Israel, but the Jewish State bears some culpability for the PA's apparent support for a recent wave of violence.

I had an epiphany Wednesday morning. A source I know well at the Ramallah office of Palestinian President Mahmoud Abbas—who has been working closely with Israeli media for years—posted an unusual message on his Facebook page.

"A morning of Palestinian roses, morning of martyrs and prisoners, morning of struggle, morning of honor and sacrifice—Ashraf Walid Suleiman Na'alwa (who killed two Israelis in October), Salah Barghouti (the terrorist who carried out the attack that left a newborn dead) and Shahid Jerusalem (who carried out a stabbing attack int the Old City of Jerusalem).”

I could not understand how my source, a judicious government official who holds relatively moderate views, had allowed himself to write such praise for murderers— especially when one of them (Barghouti) is a scion of a Hamas dynasty.

Unfortunately, I didn't have to wait very long for an explanation, as the official Twitter page of Fatah also called Na'alwa and Barghouti the "heroes of a heroic homeland".

Then Palestinian Prime Minister Rami Hamdallah called the terrorists "virtuous martyrs," while Ramallah's clock square saw a demonstration in support of the terrorists. The Palestinian Authority knew about the protest, and did not interfere.

In former, more orderly times, organizers of such a demonstration would have found themselves in neck-deep in an investigation, but those days are gone. An hour and a half after Hamdallah's announcement, gunmen murdered two IDF soldiers in Giv'at Asaf. Four hours later, soldiers were attacked in a car-ramming attack in Al-Bireh, northeast of Ramallah.

Although Abbas is not directly responsible for the attacks—since we can assume Fatah did not force the attacker to get into his car and drive it at people — there is a sense of a lack of restraint. When we mix together Hamas efforts to carry out West Bank attacks and the influence these efforts have on aspiring terrorists, and then throw in Fatah's forgiving attitude towards terrorists—we arrive at the current bleak reality.

But Israel also bears responsibility for this grim situation. In recent months, the PA has been shoved aside during Israeli negotiations with Hamas. The "good kids," who are largely responsible for the relative calm in the West Bank, have seen how Israel closes deals with Gaza's bullying "'problem child" to calm him down when he's throwing a tantrum. The highlight was the massive Qatari cash infusion to Palestinian civil servants in Gaza —it was then that the Palestinians in Ramallah really lost their mind.

Even the investigation of the terror attacks in the Barkan industrial zone and Ofra could have been done in a less aggressive and public way. Israel underestimated or misunderstood the consequences of IDF's loud midday entry into the heart of Ramallah. The same is true for raiding the offices of the Palestinian WAFA news agency.

It is important to understand that WAFA is not a just a local, negligible media outlet, but the Palestinian state news agency, and one of the symbols of the leadership in Ramallah. So why raid the place? To seize security cameras. But there are more creative, quiet and effective ways to retrieve security camera footage than going in all guns blazing to the WAFA offices.

The PA constantly struggles with the collaborator image that Hamas has successfully ascribed to it. Such a loud entry of army forces into the business and political Palestinian capital in the middle of the day is nothing short of giving the middle finger to the Palestinian security establishment.

In such a public atmosphere of anti-Palestinian and anti-Israel sentiments, it is no wonder that the song coming out of Ramallah is very jarring to Israeli ears. They too have a base—and it needs to be fed.