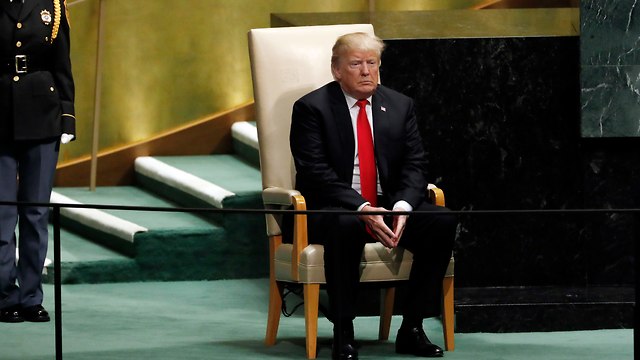 Alone and uncontrolled, Trump is the American Caligula

Op-ed: Solitude at the top is not only sad, it is dangerous, and with Mattis gone, there are no responsible adults left at the White House to watch over the president.

Alone—this is the situation in which US President Donald Trump finds himself on Sunday, in every respect: he is alone politically, ideologically, internationally, and physically.

It is true; Trump still has Fox News and enthusiastic social media fans from small towns in the US and around Israel. But they are too far way, in spirit and body, from Washington.

The generals he was so proud of two years ago—Flynn, McMaster, Kelly, and now Jim Mattis—are all out, and his confidants Michael Cohen and Paul Manafort are headed to jail.

Trump's closest ministers and advisors, those who supported him from day one, like Jeff Sessions and Steve Bannon, wouldn't dare show their faces at the White House. Even his wife, Melania, and his youngest son Barron, were planning to spend Christmas in Florida without him.

Solitude at the top is not only sad, it is dangerous: the Roman Emperor Caligula, as the legend goes, was so lonely that he talked to the moon and wanted to appoint his beloved horse, Incitatus, as consul in the Roman Senate.

The two leaders share many characteristics: pomposity, eccentricity, theatricality, and megalomania. But, as last week's events have shown us, even if Trump doesn't appoint a horse as Mattis's replacement, his growing isolation may cause him to take extreme measures that could seriously endanger the US, and the world at large.

The outgoing defense secretary played a greater role than that of the "responsible adult," as Trump's critics like to call him. He was the only one who wouldn't tell Trump what he wanted to hear.

It seems that US National Security Advisor John Bolton and US Secretary of State Mike Pompeo opposed Trump's decision to withdraw from Syria, but kept quiet. Mattis' views could be clearly seen in the blistering letter of resignation that gave lie to Trump's claim that Mattis was retiring.

With the recent departure of top economic adviser Gary Cohn (who opposed Trump's trade war with China, which led to an unsettling drop in stock markets), White House Chief of Staff John F. Kelly, and now Mattis, there is no one in Washington to voice different opinions around the Cabinet table. And herein lies the problem.

The great American presidents, such as Abraham Lincoln and Franklin D. Roosevelt, surrounded themselves with a diverse group of advisors with differing, and usually opposing views. In their eyes, arguments and disagreements were beneficial rather than harmful.

In fact, many historians believe that diverse array of opinions is what led US President John F. Kennedy to successfully solve the Cuban missile crisis and prevent a nuclear war.

It's no secret that Trump doesn't (or doesn't like to) listen to others. That's one of the reasons that led him to the White House. "I trust my gut instincts," Trumps likes to say. "My gut tells me more sometimes than anybody else’s brain can ever tell me,” he said.

From now on, there would be no one else to listen to, except that gut feeling.

The crises we have been witnessing for the past several days—the American decision to pull out of Syria, drops on Wall Street, and the bewildering number of personnel changes—demonstrate how dangerous Trump's "gut" can be.