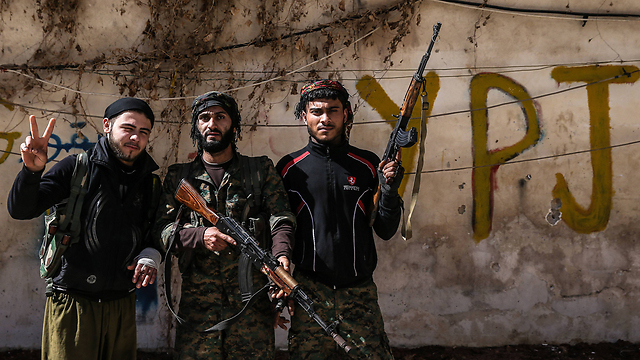 As Turkey coordinates the withdrawal of American troops with Washington, it remains steadfast in its decision to clear all Kurdish forces from Syria

Turkey said Tuesday it is working with the United States to coordinate the withdrawal of American forces but remains "determined" to clear US-allied Kurdish fighters from northeastern Syria. Foreign Minister Mevlut Cavusoglu told reporters that "if Turkey says it will enter, it will," in comments carried by private DHA news agency.

For weeks, Turkey has been threatening to launch a new offensive against the Kurdish fighters, who partnered with the US to drive the Islamic State group out of much of northern and eastern Syria. Ankara views the Kurdish forces as terrorists because of their links to an insurgent group inside Turkey.

US President Donald Trump announced the planned withdrawal of US forces after a phone call with Turkish President Recep Tayyip Erdogan earlier this month.

The minister also said Ankara and Washington have agreed to complete a roadmap on the northern Syrian town of Manbij until the US withdraws. Under the June deal, Kurdish forces would leave Manbij, in the western Euphrates valley, but delays have infuriated Turkey.

"It is crucial that the US doesn't appear as not having kept its promises," Cavusoglu said. He argued that Turkey has the "strength to neutralize" IS on its own and criticized France, which has promised to stay in Syria despite the US decision. Cavusoglu warned it would not benefit France if it was staying in Syria to protect the YPG, the main Kurdish militia in Syria.

Erdogan, speaking to reporters in Ankara, said Turkey was taking into account Trump's announcement on Syria rather than French President Emmanuel Macron's decision. The future of the international coalition against IS, which includes Turkey, the US and France, remains unclear.

The Turkish president also announced that a delegation was heading to Moscow and that he would meet with Russian President Vladimir Putin. Turkey has been negotiating on behalf of the Syrian opposition with Russia and Iran, which support the Syrian government, as part of efforts to end the nearly 8-year civil war.

A top Russian official says that Moscow expects that a hotline between Russia and the US military will be kept in place despite the impending US withdrawal from Syria.

Trump announced last week that the US will withdraw all of its 2,000 forces in Syria, a move that will leave control of the oil-rich eastern third of Syria up for grabs. Russia launched its military operation in Syria in 2015 to back its longtime ally President Bashar Assad.

Russian Deputy Foreign Minister Sergei Ryakov said Tuesday in an interview with the RIA Novosti news agency that it would be a "big mistake" to dismantle a hotline that Russia and the US use to prevent potential clashes in Syria pending the US withdrawal and said he sees no indications the Americans would do that.