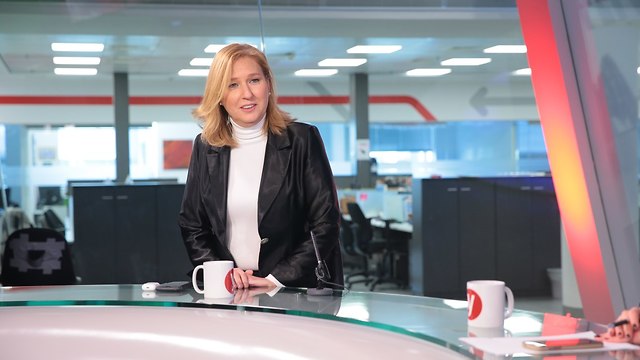 Livni: I was surprised, not humiliated by Gabbay's shock split

After surprising her by announcing at a press conference that he was dismantling the Zionist Union, Labor leader calls his former political partner 'a strong woman, not a poor woman.'

Tzipi Livni said Wednesday that she was "surprised, but not humiliated" by Labor Party leader Avi Gabbay's shock announcement a day earlier that he was dismantling the Zionist Union, unilaterally ending the partnership with her Hatnuah Party.

LIvni said in an interview to Ynet that she felt liberated by the decision. "It feels like I'm going on an old-new journey. I know it sounds strange to say this, but I'm feeling excellent today," the former foreign minister and peace negotiator said.

Hatnua leader Tzipi Livni at the Ynet studio (Photo: Yaron Brener)
The veteran politician joined forces with Labor in late 2014 under the leadership of Gabbay's predecessor, Isaac Herzog, who has since left politics to chair the Jewish Agency.

On Tuesday, Gabbay shocked the political system when he announced the end of that partnership with an unaware Livni sitting at his side.

While she has no qualms about the decision to end the partnership, Livni criticized the way it was done. "You want to end the partnership—that's your right... (but) at least give me a call, have a meeting, tell me 'Listen, it's not working out; it's not giving us the results we want. You and Bougie (Herzog) got 24 seats, with me at the helm we (are only projected) eight. Let's go on our separate ways.' I'd have said  'Happily,' shaken his hand, and held a press conference in which we'd have stood together and said it didn't work out; with mutual respect for one another," she said.

Nevertheless, Livni insisted she was "surprised, not humiliated" by Gabbay's public declaration. "This is the opposite of leadership in my opinion," she contended. "Avi planned a campaign revolving entirely on 'I need to be prime minister'—without any substance to it. We knew it was going to be bad, but I felt committed (to the partnership)," she added.

Going forward, Livni said she intends to continue her discussions with former Labor leader and prime minister Ehud Barak, as well as former IDF chief Benny Gantz, who recently registered a new party under his leadership, in an effort to create a political bloc that would offer an alternative to the current coalition government.

Gabbay, meanwhile, insisted Wednesday that there was no need to feel bad for Livni. "She's a strong woman, not a poor woman," Gabbay told Radio 103 FM.

He also rejected criticism that he would not have chosen this manner to end the partnership if Livni was a man. "I've never seen her solely as a woman, but as a colleague," Gabbay said.