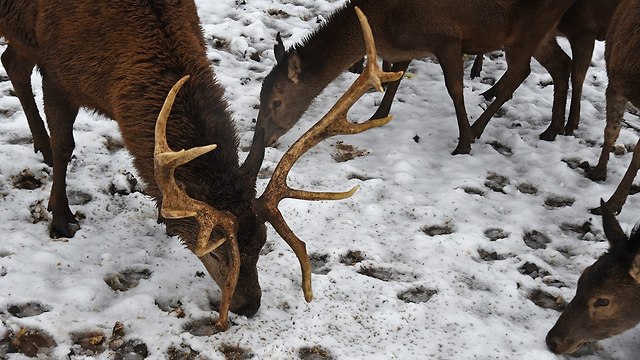 The snow in Israel’s north intensified throughout Monday, causing temporary road blocks around the Golan Heights; in Odem Forest, the deer venture out to celebrate the weather..

Golan Heights residents woke up to a much-expected snowy morning on Monday, as the storm started to settle down throughout the country. Tomorrow the storm is expected to resume and snow fall on Mount Hermon's peak is to intensify.

As snow began to accumulate, several roads were blocked off to traffic as a safety precaution, but were later reopened.

Despite the strong river currents in the Golan Heights and in the Upper Galilee, the Sea of Galilee's water level didn’t record significant increases over the 24 hours, rising only by half a centimeter. Water Authority officials said they remain hopeful and believe the situation will improve in the coming days as the storm systems progress.

According to the Meteo-Tech meteorological company, two storm systems hit the region simultaneously last Saturday and in the middle of the week, the temperatures will dip to the winter’s new low.

"The rain-snow line is concentrated in the northern parts of the country, mainly northern Upper Galilee," said Tzahi Wachsman, a meteorologist for Meteo Tech. “In the rest of the country, the weather conditions are windy and foggy."

"In the afternoon, the rain will spread to more areas in the north as well as the outskirts of central Israel," Wachsman added. "Tomorrow the storm will pick up the pace, accompanied by very strong winds, large amounts of rain and snow, which will spread from the northern Golan Heights to other areas in the north.”