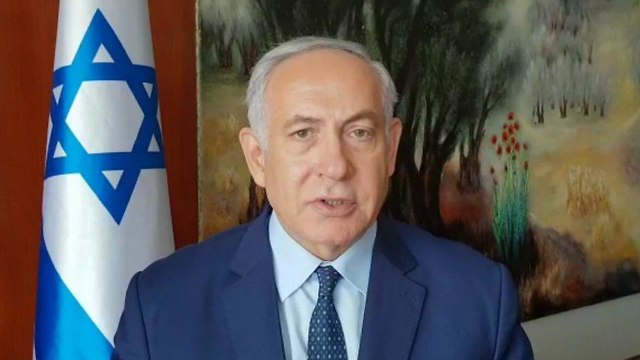 Prime Minister Benjamin Netanyahu issued a statement of support for the Shin Bet domestic security service on Tuesday, in apparent answer to complaints against the agency by the families of five minors detained during an extended investigation into Jewish terrorism.

"Several hours ago, we caught the murderer from Givat Assaf and Ofra," Netanyahu said, referring to the successful conclusion of a massive manhunt in the West Bank. "For this operation, I praise Yamam (Israel Police special forces), the IDF and first and foremost the Shin Bet, which is the best counter-terrorism organization of its kind in the world. We owe it a great deal, it performs professionally and morally. There is no room to attack it."

The five Israeli teenagers Jewish minors are suspected of hurling stones at the car of Palestinian woman Aisha al-Rawb last October, leading to her death. They are all under the age of 18 and have not been formally charged. The lawyers of the minors, as well as some prominent public figures, criticized the Shin Bet’s interrogation methods, which they believe are unethical. The accusation of abuse have also been labeled at the security agency.

President Reuven Rivlin also warned Tuesday about the dangers of attacking the Shin Bet, and urged critics to "refrain from irresponsibly attacking those whose job it is to defend Israel’s security from domestic and foreign threats.”

Speaking at the swearing-in ceremony of 29 new judges in Jerusalem, Rivlin emphasized that he was not suggesting the security agency is above criticism, which, he believes is a central function of any democratic country.

"There is no democracy without criticism," said the president, "The criticism, even of our key agencies … is the best disinfectant and a fundamental requirement. The Shin Bet, however, is responsible for the safety of our citizens … and they operate under the inspiring and professional leadership of Nadav Argaman, and his predecessors.”

“I therefore want to express my support for those who serve in all security forces, and particularly the men and women of the Shin Bet. They save lives day and night, and because of their service, we and our children can sleep peacefully," Rivlin said.

One of the prominent figures who expressed their support for the detained Israeli teenagers is Justice Minister Ayelet Shaked. On Monday, Shaked met with some family members of the detained minors, and demanded that Netanyahu act swiftly in order to ensure the Jewish terror suspects were released as soon as possible. She also urged the security agency to look for "the actual criminals."

The parents of the three main suspects publicly condemned both the justice system and the Shin Bet during their meeting with Shaked, calling on Netanyahu to intervene in the investigation.

"Apparently, boys with side curls have no rights in Israel. The interrogators spat at him and shouted that he was a murderer. Do you expect a 16-year-old to behave normally after this ordeal? Instead of looking for the killer they chase after our children. We are being persecuted because we look different. We call upon Netanyahu to release the boys today. They should go look for the real criminals," the father of one suspect said.

"They just kidnapped him from our home. They didn't even let me say goodbye. He wasn’t wearing any socks and left without his tefillin. ...The Shin Bet called us and asked for permission to give him medicine because he is ill. They can't say they don’t use torture in interrogations because I don't believe it. Who knows what he will end up confessing to?" one of the mothers said.

In response to the families' accusations, the Shin Bet issued a statement saying that the detainees' religious and medical needs were fully met.

"The suspects... did not raise any complaints with the Israel Prison Service (IPS) medical team or with the courts during their remand hearings and appeals. During their detention, the suspects' religious needs were accommodated, including prayer items and clothing, and they were permitted to perform religious rituals on Shabbat."

Meretz leader MK Tamar Zandberg slammed Shaked's meeting, accusing her recently launched party, the New Right, of having "different standards for Jews and Arabs."
"The justice minister continues to fertilize the poisonous beds of the settlers. Instead of soul searching, she is busy campaigning, making electoral calculations and running into the arms of families accused of terrorism, " Zandberg said.

"If an MK had done the same with Palestinian parents, he would have already found himself in the cellars of the Shin Bet," she added.

"In the world of Israeli judicial system, there is no room for 'another opinion’ … one of my goals at the start of my term was to clear the way for a conservative, alternative opinion,” Shaked said. “During my time, we’ve elected 330 judges … and because of that the judicial system in Israel today is more diverse and balanced.”