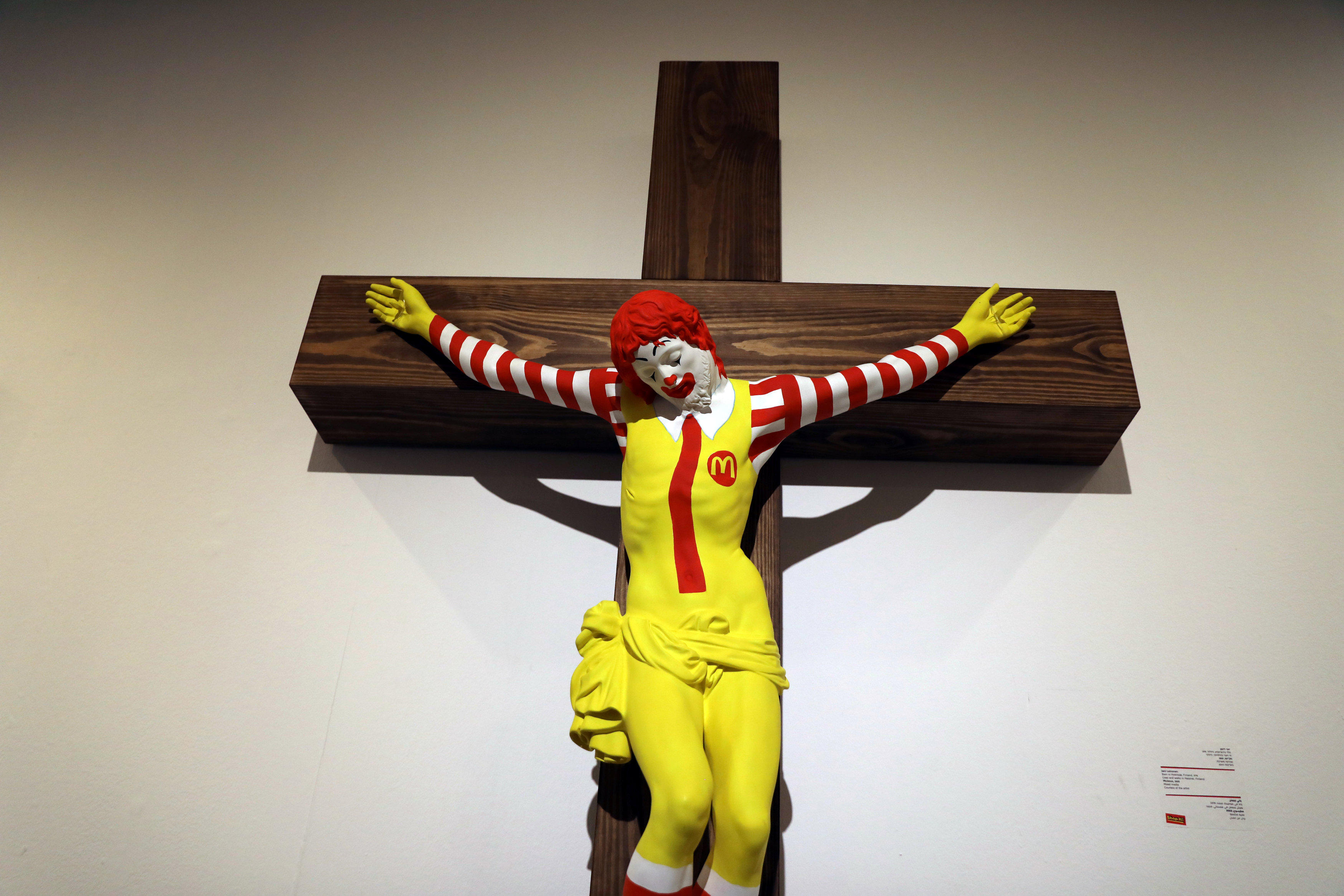 'McJesus' sculpture to be removed due to protests

Haifa Museum plans to withdraw a sculpture depicting the McDonald's mascot as the crucified Jesus following protests which briefly united the country's Christian minority, its populist culture minister and the pro-Palestinian artist.

The life-sized sculpture showing the Ronald McDonald clown on a cross has been at the center of an exhibition about consumerism and religion. Other pieces depict Jesus and the Virgin Mary as children's dolls Ken and Barbie.

The protests became violent on Friday. Police said they arrested one man on suspicion of assault and were searching for two others people who threw firebombs at the Haifa Museum of Art.

Three police officers were hurt as dozens of protesters tried to forcibly enter the museum, police said. Panes of glass along its entrance were smashed. Protests continued on Saturday.

"I object to this disgraceful sculpture," said Nicola Abdo, a Haifa resident and protester. "As a Christian person ... I take deep offence to this depiction of our symbols."

Einat Kalish Rotem, the new mayor of the Jewish-Arab city said on Thursday the sculpture would be removed form the exhibition following consultations with church leaders.

"The sculpture will be removed and returned as soon as possible," Kalish Rotem wrote on Twitter. "We regret the aggravation the Christian community experienced ... and the physical injury and violence that surrounded it."

She did not say when the piece would be removed, but it was due to be returned at the end of the month to the Finnish museum that loaned it out last year.

Christian Arabs, who make up around two percent of the country's population, found a champion for their anger in Sports and Culture Minister Miri Regev.

Citing the injury to religious sensitivities, Regev had threatened to cut state funds to the museum. The Justice Ministry slapped her down, arguing she had no such authority.

The McJesus sculptor, Jani Leinonen from Finland, had also demanded that the exhibit be removed as he was boycotting Israel in solidarity with the Palestinians.

Others saw in Thursday's decision a chance for reconciliation.

"The winner today is the people of Haifa," said Wadie Abu Nassar, an adviser to local church leaders."The removal of this sculpture is a reflection our desire to coexist in the city."