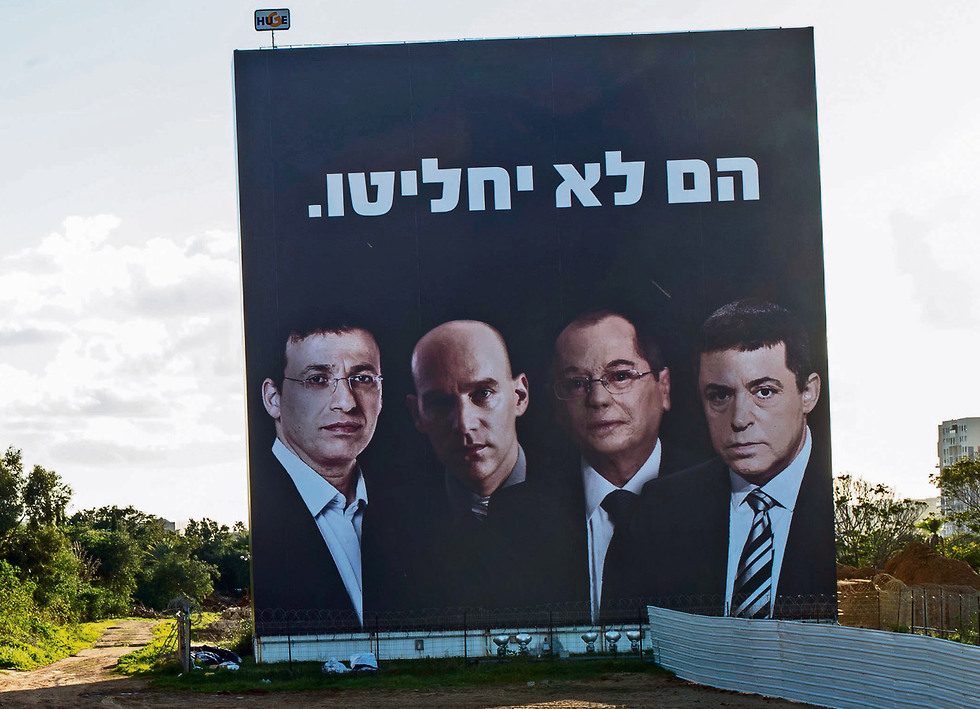 Opinion: The anti-media campaign the Likud Party launched against senior journalists, claiming 'They won't decide' the elections, is a badge of honor, not an incitement against them. The media's job is not to decide who will be the next prime minister, but to inform and educate the electorate.

Once upon a time, at the heart of Carmel Market in Tel Aviv, there was a butcher shop that sold unkosher meat. A rabbi from the Tel Aviv Rabbanut learned of the blunder. He hired a messenger and equipped him with a sandwich board bearing a grave warning: "Let it be known that the meat at this butcher shop is unkosher." The rabbi had the messenger wear the sandwich board and walk back and forth on the sidewalk in front of the store. After a month or two, the rabbi ran out of money. "Sorry," he told the messenger. "You're fired."

"That's okay," the messenger responded. "The butcher shop has agreed to pay me twice as much on one condition: that I agree to keep walking back and forth in front of the store with the warning sign."

What am I talking about? I'm talking about the (initially unsigned) billboard the Likud Party put up at the Glilot Junction. The billboard features photos of the journalists (left to right): Raviv Drucker, Guy Peleg, Amnon Abramovich and Ben Caspit. "They won't decide," the accompanying text declares.

Just like a conditioned reflex, the billboard outraged some self-declared defenders of journalism. The Israel Press Council vigorously protested; members of the Knesset from the opposition cried foul on Facebook. The key word was "incitement." The billboard is inciting against journalists, and this will end in murder.

I examined the billboard again. The photos are quite flattering. They give out an air of solemnity and respectability, just like the dress code at TV studios. The text is not offensive or inciting. It sets a fact: It won't be Abramovich, Caspit, Drucker or Peleg who decide who will be the prime minister of Israel. It won't be the media outlets they work for, either. That is the truth, and that is the desired and proper situation in a democracy. The only one who believes the media is running the country is the man whose job it is to run it: Prime Minister Benjamin Netanyahu. I imagine the four journalists who appear on the billboard are secretly pleased by the honor bestowed upon them. Their bosses must be happy: if they had money to spare, they might have considered funding the billboard themselves after the Likud activists grew tired of it. One thing I was sad about: Because of a certain investigation case that currently sits on the attorney general's desk awaiting a decision, Netanyahu was careful not to include Yedioth Ahronoth or Ynet journalists in his propaganda campaign. Two or three years ago, we were the Big Satan. Since then, we've become Voldemort—the paper that must not be named. Therefore, it is important to state this: Yedioth Ahronoth's journalists won't decide either. Our work is to educate the public, provide it with facts and analyses and a variety of opinions from all parts of the political map—and not to decide for the electorate.

The four men on the billboard are senior journalists, with many achievements under their belts. Their status is solid: their jobs are guaranteed, as are their freedom of speech and freedom of action, as well as the confidentiality of their sources, and the protection from SLAPPs (strategic lawsuit against public participation). Full disclosure: I too enjoy these privileges.

Prime Minister Netanyahu (Photo: Alex Kolomoisky)
The problem that threatens the future of the free media in Israel is not in the abuse that prominent journalists receive on social media or in political campaigns. Journalists at this status are not fragile beings. They understand that what they are allowed to say, so can the politicians they criticize. The problem is the delegitimization of the institution of journalism with the rejection of its vital role in a democratic society. Here there are some similarities between the United States and Israel. In both countries, there are anti-media politicians, who suffer from a serious persecution complex and bothersome legal woes. Both countries have a long-honored tradition of free, critical media, which continues to exist even when large parts of the public are unhappy with it. Trump and Netanyahu seek to take advantage of the suspicions toward the media to get more votes. The motive is similar, but the results are different: in the United States, the media is currently enjoying immense prosperity. A sympathetic media or a contrarian media: the interest in Trump helps everyone's bottom line. Netanyahu is less interesting to the Israeli public. Ironically, Netanyahu is a victim of his own success. He seeks to paralyze the gatekeepers, but when the attorney general, the police commission and the state comptroller were all appointed by him, he has a hard time convincing anyone. On the contrary: He only makes himself appear more suspicious. His coalition seeks to delegitimize the Supreme Court and the entire justice system, but thanks to the alliance between Justice Minister Ayelet Shaked and the (former) head of the Israel Bar Association Effi Naveh, the Supreme Court is closer to the right wing's agenda these days. The coalition is actually attacking itself. And lastly, the media. In recent years it has been filled with journalists of the religious-right sector, who quickly maneuver between Bezalel Smotrich, Naftali Bennett, Natan Eshel and Netanyahu. How to silence some journalist and praise the rest—that is the challenge.