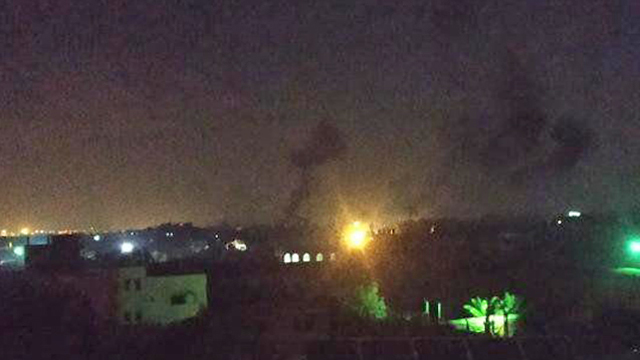 Two posts belonging to the terror group's military wing reportedly struck in the evening hours after an Israeli officer had been shot by militants earlier during violent riots along the border fence; In light of the escalation Israel cancels third Qatari cash infusion meant for Gaza's civil servants.

Israel Air Force struck at least two Hamas military positions in northern Gaza on Tuesday evening in response to an earlier incident which saw an IDF officer lightly hurt by gunfire from the Strip, according to Israeli military.

The residents of Israeli communities near the Gaza border reported a series of loud explosions in the evening hours, which prompted some to rush to safe rooms and bomb shelters, anticipating a possible Hamas-led rocket fire in response to Israeli strikes.

Earlier, a brigade commander for the Paratroopers, apparently had his life saved when his helmet stopped a bullet fired during the violent riots that erupted along the security fence on Tuesday afternoon. According to the IDF, hundreds of Palestinians were hurling stones at Israeli troops and trying to breach the security fence.

The IDF responded by shelling a Hamas military position near the security fence, killing at least one and wounding two others. Hamas confirmed the three Palestinian casualties as its members.

In light of the renewed violence along the border, Prime Minister Benjamin Netanyahu cancelled a Qatari donation of $15 million for the Palestinian civil servants in the Gaza Strip that had been due on Wednesday as part of international efforts to head off a military confrontation.