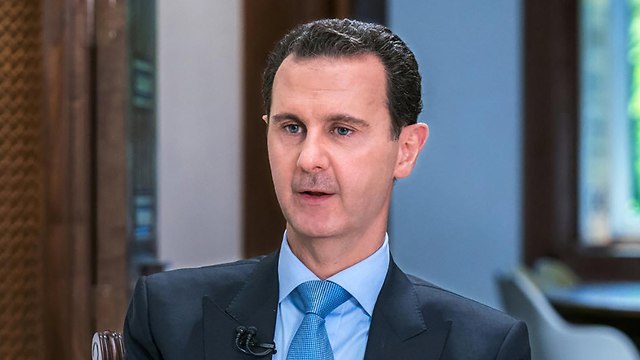 While Israel and Iran were fighting

Opinion: Syrian president has refrained from interfering in the battles between the Jewish state and its archenemy on his territory, since he has much to gain from a conflict that bolsters the stability of his rule in the war-battered country.

Only Syrian President Bashar Assad remains silent in the midst of the drama that followed this week's skirmish between the Israel Defense Forces and the Iranian Revolutionary Guard's elite Quds Force.

Israel launched a massive attack on Iranian targets in Syria in the early hours of Monday, the day after Iranian fighters fired a surface-to-surface rocket at the northern Golan Heights. The Israeli bombardment, which targeted an airport in Damascus, killed 12 pro-regime fighters, said the Syrian Observatory for Human Rights, a UK-based monitoring organization.

This war is being waged on his soil, but without him. Assad has failed to issue official statements and refrains from interfering in the rounds of fighting between Israel and its archenemy Iran in his territory. It seems he has decided to let the big players make their moves, while he stands by and uses his time to deal with domestic issues.

Truth be told, the Syrian president is rather busy with restoring and expanding his rule in Syria. He is on the verge of claiming victory over his enemies, he managed to fend off Turkey's intent to launch an offensive to break Kurdish control over the Syria-Turkey border, and he is working to restore his sovereignty over northern Syria.

And so, all at once, those who called to remove the embattled president from power have fallen silent. Iran is giving him full freedom of action, Russia's Putin is considered his strongest ally, and even Israel has long since dropped the idea of taking him down since he has no replacement in sight.

It appears Jerusalem is comfortable with Assad being around. Had it not been for the Iranian presence in Syria, Assad would never have dared to come out against the Jewish state.

Nevertheless, the Syrian army hosting Iranian "consultants" is a big problem for Israel. The Quds Force, which is in charge of the Iranian Revolutionary Guards' overseas operations, is dragging the Syrian troops into its ongoing battle against Israel, and Assad is giving Tehran an almost carte blanche in Syrian bases, putting arms depots at its disposal and allowing Iranian aircraft to freely enter Syrian skies.

Two months ago, Assad was embroiled in a crisis that threatened to tear Syria apart. And look at him now—the Arab world is courting him, and Egypt is quietly working to reinstate Syria into the Arab League, with the Persian Gulf states tending to back this move.

Syria's main problem remains Saudi Arabia. The Riyadh royals have yet to make a definite decision on whether to welcome Syria back into the bosom of the divided Arab world and reopen the Arab embassies in Damascus, or to continue arming those opposing the Syrian regime in order to hurt Iran.

It has been three weeks since Assad made a public appearance in Damascus, or had a "surprise" meeting with Syrian civilians in locations that underwent a thorough security inspection. Assad prefers to stay in his palace with his sick wife Asma and his children, until the fighting between Israel and Iran settles down.

Once the fighting is over, then it is safe to assume that Assad will reappear to flash his people the victory sign, proving to the world he believes in his own triumph as Syria's ruler.

In the meantime, the president is holding meetings at his palace with senior military officials and public figures known for their policy of "sitting quietly."

In fact, just three days ago, it was reported that several Syrian intellectuals had been invited to meet with the great leader who seems to have a lot of time on his hands.

In between meetings, Assad reportedly received calls from Iranian officials and representatives of the Russian army updating him on what is happening on the frontier with Israel.

It was said that during one of this call, Assad was informed about Syrian accomplices helping the "enemy," and in response send his special forces to deal with those accomplices.

Nevertheless, the war in Syria has changed over the past two years. The Syrian army and the Iranian troops in the war-battered country have become more united.

The decision whether to bolster this unity is not Assad's to make. As far as Assad is concerned, he has most to gain from this war. The stability of his rule is no longer in danger, at least for now.