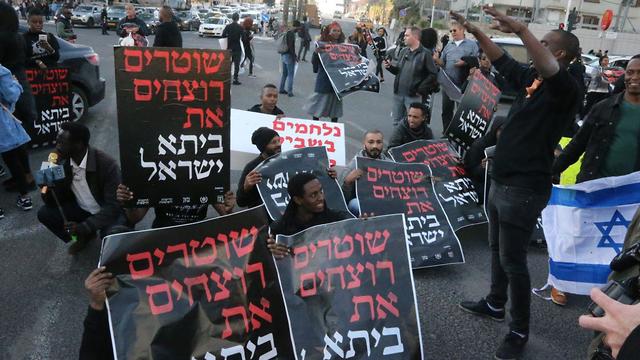 Ethiopians shut down Tel Aviv with protest against police brutality

Ayalon Highway was blocked to traffic and many Tel Aviv streets are at a standstill as the Ethiopian community protests police overreaction following killing of Yehuda Biadga, 24, in Bat Yam two weeks ago; Vigil at Rabin Sq.

It began at Ezrieli Junction, continued onto the Ayalon Highway and ended at Rabin square where thousands of Ethiopians gathered to protest against police brutality in Tel Aviv Wednesday afternoon and evening. After blocking the Ezrieli Junction, protesters proceeded to descend to the Ayalon Highway bringing traffic on Tel Aviv's main artery to a standstill. Many other Tel Aviv streets were blocked as well causing huge backups and delays all over the city and the wider Gush Dan area.

The protest was sparked by the killing of Yehuda Biadga, 24, by police in Bat Yam two weeks ago as he was waving a knife. Witnesses say the youth posed no direct danger to the lives of the officers. The incident is still being investigated.

Biadga's family accused police of excessive force, and protest organizers called the incident "the straw that broke the camel's back" after years of perceived discrimination by Israeli authorities.

Parents of Yehuda Biadga hold a photo of their son (Photo: Motti Kimchi)

The protesters carried Israeli flags and signs saying: “Police are killing Beta Israel” and “Police state.” They chanted against trigger happy police and called for the incarceration of police who react with undue violence instead of defusing a situation.

Ezrieli mall was closed once the protest began, in an unprecedented step, apparently on orders from the police fearing disturbances. Following the protest, participants marched to Rabin Square where speeches were delivered by the religious elders of the Ethiopian community, candles were lit and the names of those killed by police were read aloud.

As the crowd gathered in the square, a small group of protesters broke away and became violent, throwing chairs and overturning tables at an ice cream parlor along Even Gvirol St., which was blocked to traffic.

Atlai Biadga, Yehuda’s father, spoke at the gathering in Amharic: “They took my son; I am both sad and happy to see you all here, to see how loved my son is.” He added that he hopes the officer who shot his son is put on trial.

The family of Yosef Salamsa, who committed suicide in 2014 following abuse by police using a taser gun, also spoke at the event expressing outrage at the conduct of the police.

Dasli Takala, one of the organizers, told reporters: “We are dealing with the Israel police which is a criminal organization… From violence they have moved on to murder; they have already killed 10 (unarmed Ethiopians). We are a community of activists. The government of Israel interprets our politeness as fear, but that is our strength.”

Another organizer, Shahar Mulla said: “We are no different from other citizens of Israel. The police portray us as violent criminals but we will not allow them to harm our children. We are fighting against this violence that is harming our children. We don’t need any more crying mothers or bereaved families. We are not seeking blood in exchange for blood. This is a fight for our very existence.”

Another protester said: “We are black, but we refuse to be the black sheep of the state.”

“We didn’t want to come and block the Ayalon Highway but the police have left us no choice, with their guns and tasers,” said one protester.

“Reality has blown up in our faces again; after the protest of 2015 we thought that four years would have brought us closer to Israeli society but apparently not; we are still outcasts,” lamented another participant.

Elias Inbram, one of the organizers, told Ynet that no national leaders condemned the killing of Yehuda Biadga, “apparently it is of no interest to them, but maybe when the roads are blocked and Rabin Square is packed they will pay attention.”

Inbram addressed the police’s warning against a violent protest saying: “What would we say when confronted abroad with accusations that Israel kills Palestinian children and calls for the de-legitimization of Israel? Enough of the reverse psychology; we are always portrayed as a quiet and gentle community and suddenly we are the aggressors — what happened?”