Scene of the crash on Route 443
Photo: Ohad Zwigenberg 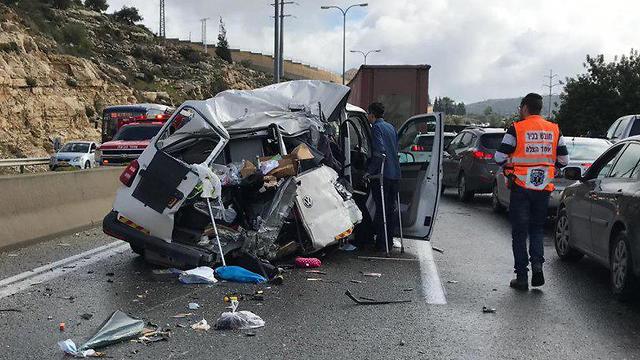 Preliminary police investigation into accident that killed two people finds that bus flipped over after rebounding from collision and hitting safety barrier; police says it's still unclear why the driver lost control of the vehicle.

A preliminary police investigation found that a deadly road accident on Route 443 on Sunday morning, which claimed the lives of Rachel Gutman, 29, from Modi'in Illit, and Ruchama Rosen, 27, from Jerusalem and left another 51 people injured, occurred as a result of a collision between a rescue vehicle and a bus that crashed into it and overturned.

The incident occured close to the West Bank settlement of Beit Horon. The bus, belonging to the Kavim company, was heading from Modi'in Illit to Jerusalem.

According to the police, the driver of the rescue vehicle stopped near the safety barrier in order to help those involved in a separate minor traffic accident on the opposite lane. The bus that was closely following the rescue vehicle crashed into it prompting it to tip over, sliding into a ditch and hitting a safety railing.

The two drivers involved in the accident were called in for questioning under caution by police. The road was reopened after being closed off to traffic for up to five hours.

The police said that despite some conflicting eyewitness reports, the driver of the rescue vehicle, who was left lightly injured, stopped his car in an orderly manner and it’s not clear why the bus driver lost control of the wheel.

The Magen David Adom rescue service said large numbers of its emergency personnel rushed to the scene to treat the injured. Fire and police rescue workers used specialist equipment to free a number of people trapped in the wreckage, including a crane that tipped the bus off its side and back into an upright position.

"It was a shocking sight. We saw the bus upside down on the side of the road," said Fadi Dakidak, an MDA paramedic who arrived as part of an intensive care unit.

“It was chaotic, some of the bus passengers came out on their own and some with the help of our paramedics and soldiers who were in the area … Two women, about 30 and 50 years old, were trapped in the middle of the bus and showed no signs of life.”

Deputy Health Minister Yaakov Litzman arrived at the scene shortly after the accident, while Prime Minister Benjamin Netanyahu addressed the incident at the weekly cabinet meeting. “I was updated a short while ago on the accident on Route 443,” said Netanyahu. “I lend my support to the rescue forces who are engaged in rescuing and treating the injured. We are all praying for the victims.”