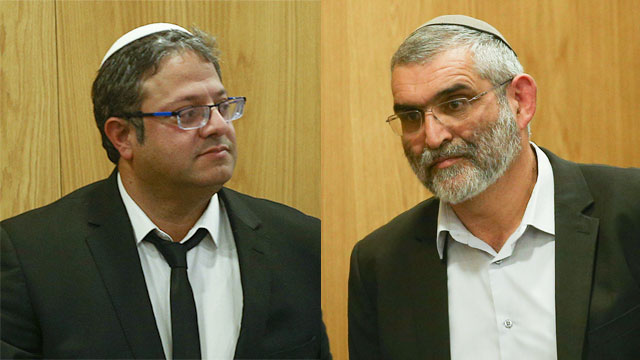 Despite AG’s recommendation, Ben-Ari can run

Following a turbulent debate, the Knesset Elections Committee approved the candidacy of Otzma Yehudit candidates by one vote; Leftist parties to appeal to Supreme Court; Ben-Gvir: ‘Kahane was right, but we don’t generalize all Arabs, those who are loyal should stay.’

The Central Elections Committee ruled Wednesday that the Right wing Otzma Yehudit candidates Itamar Ben-Gvir and Michael Ben-Ari can run for the Knesset, despite Attorney General Avichai Mandelblit and State Prosecutor Shai Nitzan advising against allowing the latter to run; the committee’s vote passed by one vote.

The committee is made up of members representing the various Knesset parties. The Right wing parties announced earlier that they would vote against outlawing the two from running and the representative of the Kulanu Party abstained.

Ben-Gvir; Ben-Ari (Photo: Ohad Zwigenberg)
“I think that the committee demonstrated its independence today and fortunately it approved the candidacy of Dr Ben-Ari and myself,” said Ben-Gvir. “I must say that I was very distressed to hear the position of the attorney general advising outlawing Dr Ben-Ari’s candidacy.” Ben-Gvir proceeded to criticize the attorney general for allowing Hanin Zoabi to be in the Knesset despite the actions she took against the State of Israel, in addition to other candidates of the Arab parties. “He ought to engage in self reckoning… It is unthinkable that they would defend Balad, Ra’am-Ta’al and Hadash (Arab parties) and be against Dr Ben-Ari,” he said.

Ben-Gvir (Photo: Ohad Z)
MK Stav Shaffir (Labor) announced that she would appeal to the Supreme Court against the committee’s ruling. “We will ensure that these violent racists and instigators — followers of Kahane who even the Likud compared with Nazism — are kept out of the only parliament of the Jewish people,” she said. Meretz Chairwoman MK Tamar Zandberg also criticized the committee’s decision calling it a mark of Cain on the Knesset and saying that she will appeal to the Supreme Court. She also called out Finance Minister Moshe Kahlon whose representative abstained from the vote.

Tamar Zandberg (Photo: Ohad Z)
“I am the dangerous man that the attorney general thinks cannot be in the Knesset,” said Ben-Ari. “A father of nine children whose son stood on the military parade grounds only 55 minutes ago.” Ben-Ari called Kahane “my master and teacher,” and rejected accusations that he is a racist but that all that he has done has been for the sake of the Jews. “Those who seek to harm us, their place is in Mecca, but those who are loyal should stay here… I have no problem with Arabs who are loyal to the State of Israel,” said Ben-Ari, who a decade ago served four years in the Knesset. Earlier, the committee’s discussion was interrupted by an squabble between Ben-Gvir and Arab MK’s. Afterwards, the committee Chairman Justice Hanan Melcer rebuked Ben-Gvir and Betzalel Smotrich for shouting at the attorney general’s representative.

Judge Hanan Melcer (Photo: Ohad Z)
Ben-Gvir argued that the real test is about actions, not words. “Saying ‘enemy of Israel’ is not racism, it isn’t all the Arabs and one who says that all the Arabs are enemies is a racist.” He accused his opponents of using his words selectively and lying in order to ban him. Melcer responded that a candidate can indeed be invalidated over expressions and not just over actions. Ben-Gvir further stated that even if he doesn’t agree with all that Meir Kahane has said, he was right in calling for the death penalty for terrorists and that without loyalty there can be no citizenship.

Central Elections Committee (Photo: Ohad Z)
During the session, a Likud representative heckled Meretz MK Issawi Farij saying :”In Syria you would have no voice.” Farij responded: “Racist, I am fighting for my life.” To which Ben-Gvir responded: “He thinks he is on the Marmara (a ship of radical activists who tried to sail to Gaza).” When Ben-Gvir tried to show MK Shaffir a lawsuit against her fellow MK Michal Biran for defamation of character because she called him a Nazi, Shaffir brushed it off.

MK Issawi Farij (Photo: Ohad Zwigenberg)
A panel of seven Supreme Court justices is expected to rule on the committee’s decisions, which are ultimately political in nature, due to the composition of the committee. The committee is also set to rule on whether Hadash MK Ofer Ksif can participate in the elections considering statements he made in the past. They are also scheduled to rule on whether the Balad Party should be allowed to run. In their recommendation against Ben-Ari but for the candidacy of Ben-Gvir and the Arab parties, the attorney general and state attorney brought examples of statements made by Ben-Ari regarding the Arab population as a whole, and not just those involved in terrorism. For example, at a Kahane memorial event in 2017, Ben-Ari sais that the Arabs like us slaughtered, but Rabbi Kahane taught us that there is no coexistence with them.”