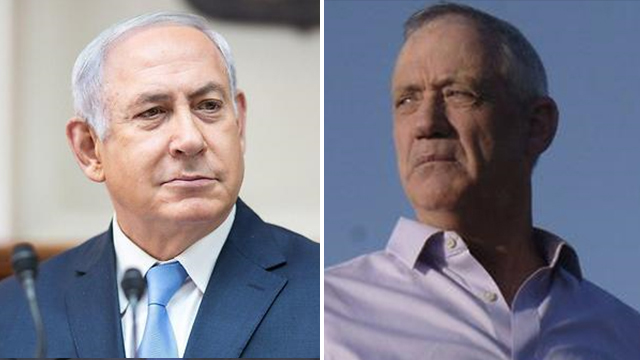 Blue and White Party officials allude to the Prime Minister's Office being involved in leaking claims about Iranian intelligence breaching Benny Gantz's phone, suggesting the leak traced back to a 'specific office in Jerusalem.'

Blue and White Party officials on Saturday urged Attorney General Avichai Mandelblit to investigate who leaked claims that Iranian intelligence hacked the phone of their party leader Benny Gantz. The party officials, who reject any prospect of a national security breach, also alluded to possible involvement of Prime Minister Benjamin Netanyahu and his associates in the affair.

On Thursday Benny Gantz’s campaign confirmed that the former military chief, who has been campaigning on his security credentials in a bid to end Netanyahu’s decade-long rule, was the target of an Iranian hacking attack several months ago.

The appeal made to Mandelblit doesn’t explicitly place blame on the prime minister, mentioning only the fact that the leaked report traces back to a “very specific office in Jerusalem.” "If the leak was motivated by political interests, it would constitute a threat to the security of the state, in addition to a breach of trust of the highest order.”

"There’s nothing that illustrates the loss of morals more than a situation in which state security and state officials are enslaved in favor of a narrow political interest." In addition, Blue and White asked the attorney general to instruct the prime minister, who is in charge of the cyber network, to "refrain from using bodies under his authority, as well as the information available to him, for personal and political interests.”

“It should be emphasized that the incident in question happened some four years after Gantz finished his term as (military) chief of staff and the current timing of its publication raises many questions,” Blue and White, which has outpaced Netanyahu’s conservative Likud in pre-election polls, said in a statement.

A day after the news about the phone hacking broke—sending his new Blue and White party reeling—Gantz convened a surprise press conference on Israel’s southern border, where he tried to divert attention to recent violence involving Gaza militants (who fired two rockets at Tel Aviv Thursday evening). Gantz has pointed to his leading role in the 2014 Gaza war as proof of his toughness.

“We’re fighting for our home and our struggle for democracy and ethics here,” Gantz said, chiding reporters who asked about the hacking. “The phone is not the story..I ask you all to be serious enough to deal with what’s important.”

Gantz provided few details about how he was hacked or what type of information might have fallen into the hands of Iranian intelligence. He attempted to play down the scandal as “merely unethical prying.”

The Prime Minister’s Office denied all involvement in the scandal, emphasizing that the head of the Shin Bet domestic security service did not update Netanyahu on the issue. “Neither Likud, nor the prime minister are involved in this in any way,” said the Likud party in a statement. “Gantz, however—who says that we should be more aggressive in Gaza—supported the dangerous Iranian nuclear deal, and participated in an event marking the deaths of 1,000 Hamas terrorists killed in Operation Protective Edge.”

Blue and White, however, doubled down on their claims that Netanyahu is the one behind the leak. “In a 36-word statement, there are three false remarks, which is a new record. Gantz didn’t support the Iranian nuclear deal, and didn’t participate in the event marking the deaths of terrorists. He also didn’t release 1,027 terrorists from Israeli prisons, like Netanyahu did in the Gilad Shalit prisoner exchange deal,” said the party statement.