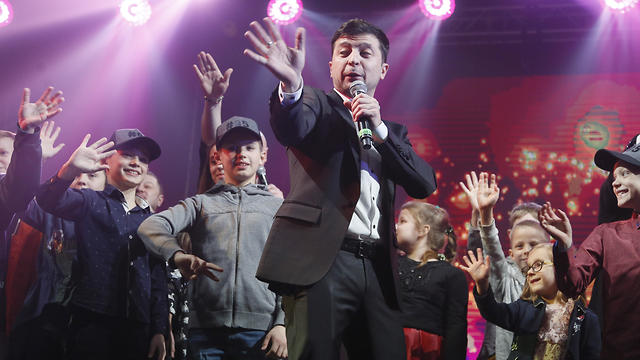 Unlike Ukraine, Israel already has clowns for politicians

Opinion: Jewish comedian who won the Ukrainian presidential vote proves that people around the world are tired of 'professional politicians' and this phenomenon might soon sweep Israeli politics as well

When the news broke that a Jewish comedian with no political experience - who for years played a president on TV - won Ukraine's presidential election, it wasn’t surprising.

During his elections campaign, 41-year-old Volodymyr Zelenskiy promised to improve the country’s dire economic situation, put an end to the bloodshed in eastern Ukraine (where an armed conflict between Ukrainian forces and pro-Russian groups has been tearing the area apart since 2014) and make the Internet available to residents of every remote village in the country.

The problem is with his lack of experience and questionable skills as a politician. His platform is about as realistic as me - as a fellow comedian - saying that if I became prime minister I would be able to lower the sky-high housing prices in Israel.

On the other hand, Zelenskiy’s victory reminded me of a case I witnessed in the army. One of the veteran soldiers, who was not the sharpest tool in the box, climbed onto the roof of a sergeant’s office and declared that if he wasn't allowed to go home at the weekend, he would jump. Even though the office building was just above two meters (6.5 feet) high, everyone on the base came out to watch the “Sergeant on the Roof” show, while me and a few other young soldiers tried to convince the guy with a broken spirit not to also break his legs.

About an hour into the event, the sergeant finally came out of the office, looked on the roof and without hesitation barked at the soldier standing there: "Hello, soldier! Come down this instance!” The soldier looked at the sergeant - who himself wasn’t the most sensible of men - and to everyone’s surprise climbed down. He went straight into a military courtroom where that same sergeant explained to him there are worse things in life than not being able to go home for a weekend, for instance, not being able to go home for a month.

The point of this story is that when two loonies have an argument, there’s a good chance they will eventually solve it in a most rational way possible. So perhaps at a time when Ukraine is collapsing under the pressure of various economic, security and social problems, someone with no political experience - and no interests attached to it - will be actually able to solve the problems.

In any case, Zelenskiy’s victory is not strictly a Ukrainian issue, because he’s a part of a wave of young leaders around the world with no political experience being elected by the public that’s disgusted with politicians.

In the last general election in Israel we saw this phenomenon gain momentum when those voting for the inexperienced former military chief and Blue and White party leader Benny Gantz, said they prefer him simply because “he’s not Bibi.” Soon, we may see this wave of electing “non-politicians” sweeping Israeli politics as well.

If, however, you’re wondering when the Knesset will have its first comedian as an MK, then just look at those currently occupying parliamentary seats. The question is not when our comedians will become politicians, but rather when our politicians will stop acting like a bunch of clowns.