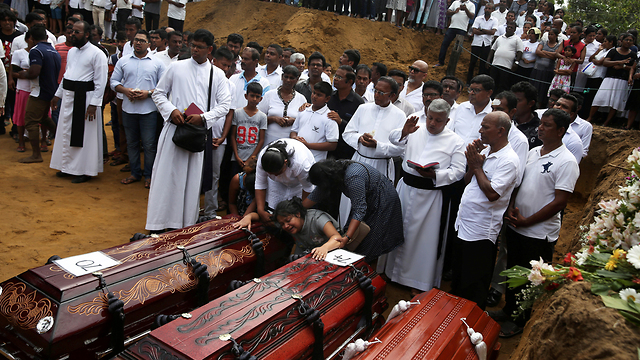 Opinion: Horrific Easter Sunday bombings highlight the importance of security services constantly adapting to changes on the ground and not relying on past achievements - which the Sri Lankan government did after defeating Tamil Tigers almost a decade ago

Israeli tourists flocking to Sinai for Passover holiday don’t seem to be taking seriously the warnings by the security officials about an imminent threat from Islamic State cells operating in the area. The reason is that over the years these warning never materialized. This time, however, I would take the calls of Israeli defense establishment seriously, as the cooperation between Israeli and Egyptian security services seems to be stronger than ever and that's exactly what Sri Lankan government appears to have failed at in the wake of the terror attacks that killed at least 359 people.

Three years ago I visited Sri Lanka along with a number of former Israeli security personnel, who gave a short seminar - to an audience of local security officers - on the subject of prevention of terror attacks. Although the officers politely listened to the lecture, it appears they had not internalized the message, since they probably felt they already had everything under control.

After all, Sri Lankan security apparatus managed in 2009 to thwart a violent, decades-long campaign by the Tamil Tigers (a rebel group demanding independence) and achieve national reconciliation. Unfortunately, as we have seen this week, nothing lasts forever.

The current regime in Sri Lanka failed similarly to the US government in the wake of 9/11 attacks and to some extent to our failure at the onset of the Second Intifada. In Europe too, similar failures led to a series of terror attacks in recent years. The failure stems from the lack of ability - from the government and security forces - to adapt their security response to changing conditions on the ground.

There are three lessons which can be learned from the horrific Easter Sunday attacks and all of them have - one way or the other - to do with intelligence gathering.

Firstly, the biggest difficulty in the war on terror stems from not knowing who’s the real enemy. Fortunately, today’s technology allows the security forces to access the information from even the darkest corners of the Internet and listen to any phone conversation. The advanced search engines can easily identify repeated searches related to terror activity. Yet, governments around the world still prioritize investment in warplanes and tanks rather than in advancing its intelligence capabilities.

Secondly, it’s important to establish communication between the various intelligence agencies, similar to what the United States did after 9/11 - and what Israel did 20 years ago - and what Sri Lankan government should’ve done. There was concrete intelligence information, which didn’t reach those who were supposed to act on it.

In Israel, the key event that led to an overhaul in the intelligence gathering network was a suicide bombing at Mike's Place bar in Tel Aviv in April 2003. Two terrorists with British passports flew from the UK to Jordan, from there made their way to the West Bank, then to Gaza and eventually to Tel Aviv where they carried out the attack.

Therefore, Israel came to the conclusion that it needed one big database that all the intelligence organizations could use, while maintaining their autonomy.

The final lesson to be learned has to do with the importance of international cooperation. Since the establishment al-Qaeda and Islamic State, terrorism has become a global phenomenon, and case in point, on Tuesday, Islamic State claimed responsibility for the bombings in Sri Lanka. Intelligence gathered in one country could be relevant to another. Therefore, even if there is political tension between the countries (for instance India and Sri Lanka or Israel and Egypt), security cooperation should remain the supreme interest.

These three lessons are old and well known, but unfortunately only a large-scale traumatic event on a country's own soil causes governments to finally adopt the right policy.