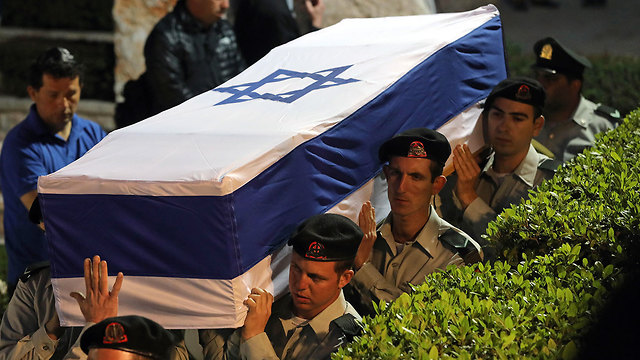 This Memorial Day, Zachary Baumel is no longer missing in action

After 37 years of uncertainty, the fallen American-born soldier's family has a grave at which to mourn, after his remains were located in Syria and brought home in a joint Israeli-Russian effort

For the first time since Zachary Baumel went missing in action in Lebanon 37 years ago, his family has a grave at which to mourn on Memorial Day.

The Baumel family spent almost four decades without knowing what happened to the soldier, who disappeared during a battle near the Syrian border in the First Lebanon War. His remains were located in Syria and brought back to Israel for burial last month.

Baumel went missing during in Lebanon in June 1982, along with Zvi Feldman and Yehuda Katz. His remains made their way to Israel after a two-year operation named Bittersweet Song, in which Israeli Intelligence units, along with Russian forces, located the MIA's remains in Syria.

On Monday, the Baumel family went to visit Zachary's grave in Mount Herzl military cemetery in Jerusalem, 30 days after the burial. They were surprised to discover a great crowd awaiting them that wished to honor Zachary's memory.

The funeral for Zachary Baumel at Mount Herzl military cemetery in Jerusalem (Photo: EPA)
"We saw all the people of Israel: the elderly, the young, the secular and the religious," said Asna Haberman, Zachary's sister. "This place brings people together and connects them. They came from all over the country, north and south. There was a feeling of unity," she said.

Zachary Baumel's mother Miriam, left, at his grave during the service to mark 30 days of mourning (Photo: Ohad Zwigenberg)

Zachary's father Yonah, who worked tirelessly to find information about his son's fate, never lived to see his burial. He died a decade ago, but his actions helped keep the search for his son in the public eye.

The families of Zvi Feldman and Yehuda Katz, the two other MIAs from the battle, expressed their hopes that their loved ones will also be found following the return of Baumel's remains. On Wednesday they will commemorate another Memorial Day without knowing what happened to their sons.

The Sultan Yacoub battle took place on the sixth day of the First Lebanon War, near the Lebanese village of Sultan Yacoub close to the Syrian border. Israel suffered 20 confirmed losses in the battle, as well as dozens of wounded.

Six soldiers were unaccounted for, including Baumel, Feldman, and Katz. Several years later, two of the other missing soldiers were returned alive to Israel in prisoner exchanges with Syria and the Popular Front for the Liberation of Palestine. The body of the sixth soldier was also returned to Israel.

Israel released two Syrian prisoners in what it said was a "gesture," several weeks after Baumel's remains were repatriated.

Officials claimed the gesture was decided on after Baumel's funeral and did not constitute a prisoner exchange deal.