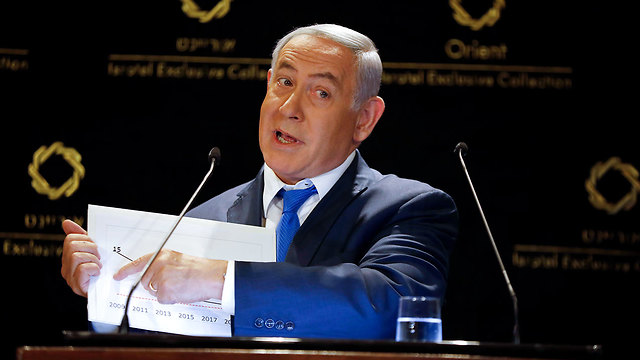 Netanyahu shows off Trump's map of Israel with Golan Heights

With a prospect of an unprecedented second election campaign in the same year looming, the prime minister attempts to play down the political turmoil by turning the public's attention to foreign policy; Trump says he feels 'very badly' Netanyahu failed to form government

Prime Minister Benjamin Netanyahu says U.S. President Trump's son-in-law Jared Kushner has gifted him an official State Department map, updated to incorporate the long-disputed Golan Heights as part of Israel. Speaking at a news conference in Jerusalem on Thursday, Netanyahu addressed a nation rattled by the prospect of an unprecedented second election campaign in the same year, after the newly re-elected Netanyahu failed to form a governing coalition.

Prime Minister Benjamin Netanyahu (Photo: AP)
In a bid to play down the political chaos and focus public attention on his foreign policy prowess - in particular his close friendship with Trump - Netanyahu whipped out Kushner's map, on which President Trump had scribbled, "Nice."

"This map had not been updated since the Six Day War," said Netanyahu, referring to the 1967 Middle East war, after which Israel captured the Golan Heights from Syria. "Well, it has been updated, it just got an update. ... That is to say, there are very important developments here."

He pointed to a note scribbled on the map, which he called President Trump's personal handiwork. "Here is the signature of Trump, and he writes 'nice.' I say, 'very nice!'"

Kushner met with Netanyahu earlier on Thursday to push the Trump administration's long-awaited plan for Mideast peace, just as Israel was thrust into the political tumult. Kushner and U.S. special envoy Jason Greenblatt stopped in Israel as part of a Middle East tour to rally support for the administration's upcoming economic conference in Bahrain, which the White House bills as the first portion of its peace plan.

The U.S. is hoping to draw Arab states with deep pockets to participate in the workshop, which envisions large-scale infrastructure work and investment in the Palestinian territories.

In brief joint remarks, Kushner touted American-Israeli cooperation, saying, "it's never been stronger and we're very excited about all the potential that lies ahead for Israel ... and for the whole region."

Netanyahu attempted to play down concerns that the Israeli parliament's dramatic dissolution would further postpone the U.S. peace plan rollout. "You know, we had a little event last night," he said. "That's not going to stop us."

At the White House, President Trump, a close ally of Netanyahu, weighed in expressing dismay at the prime minister's failure to form a governing coalition. Calling Netanyahu a "great guy," Trump said he feels "very badly" that the country has to face another election because there is "enough turmoil" in the region.