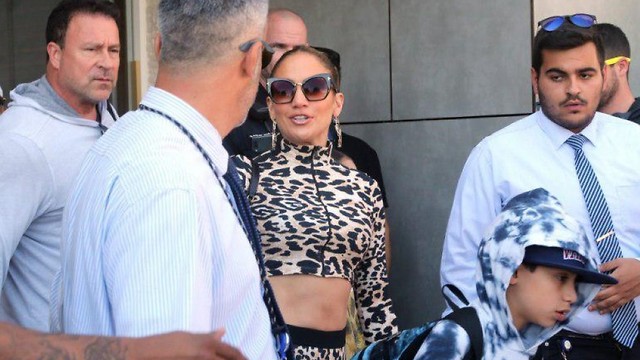 The pop singer and actress, set to perform in Tel Aviv later in the week, was accompanied by her former baseball star fiancé 'A-Rod' and her 11-year-old twins

Pop-diva Jennifer Lopez landed in Israel on Tuesday ahead of her first ever performance in the country due to take place at Tel Aviv HaYarkon Park on August 1.

Lopez, who goes by the moniker J-Lo, was accompanied by her fiancé Alexander “A-Rod” Rodriguez, a former professional baseball star, and her 11-year-old twins from her marriage to singer Mark Anthony.

This is the 50-year-old singer’s first time visiting the country.

The “Love Don’t Cost a Thing” singer came out of the plane wearing a leopard-print crop top and a matching pair of leggings with oversized sunglasses covering her face.

Lopez and boyfriend A-Rod get into a car (Photo: Yariv Katz)

The concert in Israel - as part of her “It’s My Party” world tour - is one of only five live shows to take place outside of North America.

She is considered one of the world's biggest pop stars, who during her last musical tour sold over 1 million tickets and some 80 million records worldwide.

The pop star is set to take the Tel Aviv's stage at 8:45pm this Thursday.