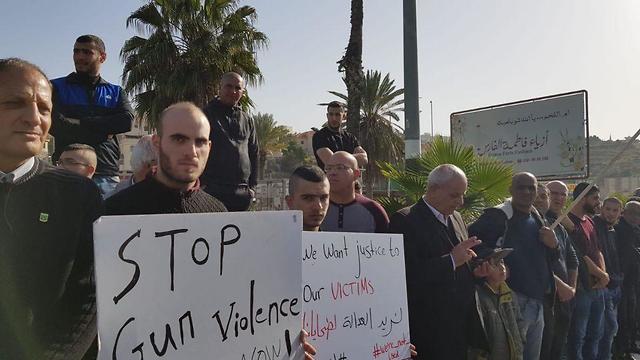 Wanted: A police force for all Israelis

Opinion: A crackdown on organized crime pushed criminals to places with less scrutiny - the Arab neighborhoods; law enforcement agencies may understand they need a community-based policy to make people feel safer, but recent budget cuts are not helping an entire sector that is suffering

A Saturday evening in June in Ramle. A family gathers as usual in the backyard. Suddenly a masked man opens fire at them. One is murdered, another seriously wounded.

The cause was a conflict between youths, leading to two murder attempts, the second of which was successful.

The story of this family is one of more than 1,300 stories of murders that have taken place in the past decade and a half.

They occur on average every five days in the backyard of the very state, the Arab communities.

The 2018 Personal Security Index recently released by equal rights NGO Abraham Initiatives shows that over one-third of Arab citizens do not feel safe in their own communities as a result of crime and violence, and that over 80% of Israel's Arab citizens say they are highly concerned.

Sixty percent of the annual murders in Israel involve Arabs, even though they only comprise about 20% of the population.

The lack of personal security in Arab communities is mainly due to the erosion of the classic mechanisms of authority that characterized Arab society as a traditional society, and the unemployment that hit the Arab public in the early 2000s in the shadow of the Second Intifada.

This resulted in a decline into widespread, deep poverty that has been reflected in recent years as a culture and not just as a socio-economic status.

Protests against a failure to reduce crime in the Arab sector

Let us not be confused. There is no genetic shortcoming among the Arab population that makes them more violent.

Compared to Palestinians in the West Bank, Arab citizens of Israel are 2.5 times more involved in crime.

In the Arab communities there is a wild west of illegal weapons that turns every little conflict into a bloody battle.

The punishment for possessing illegal weapons has become laughable.

According to a state comptroller's report, 85% of cases of illegal possession of weapons end in less than a year in prison.

But the main reason for the appalling phenomenon is the lack of policing and even lawlessness by law enforcement officials.

At the end of 2003, the government of Ariel Sharon passed a proposal on combating organized crime and the crime families in Israel.

But while the police began to act and apply pressure in the crime areas of that time, the criminals began to relocate to places where police presence was low or nonexistent - the Arab communities.

This is how Arab organized crime has over the past decade grown extremely brutal. It is deeply connected to Jewish organized crime, but its victims so far are Arab citizens, most of them poor and innocent.

In June 2016, the government passed a bill to increase personal security in Arab areas, which mandated the establishment of police stations in these communities and the recruitment of Arab police officers.

Today, the police understand that they must change the concept of policing, from one of enforcement to one of community-based operations.

If it does not do this, it will continue to lose the confidence of the local residents and will fail in its mission. Even in Arab society, there is a willingness to partner with the police to eradicate crime and violence.

A few months ago, amid a range of government's budget cuts, about NIS 400 million was sliced from the budget of the Israel Police, which had warned that this would hamper efforts to increase personal security in the Arab communities.

And this is not the only issue. Police officers who are ready to plant a weapon in a man's home for the sake of a television series will not win public trust.

Meanwhile, the sounds of gunfire and bloodshed are still a near-daily routine in the Arab communities.