The Biton family outside the local bomb shelter 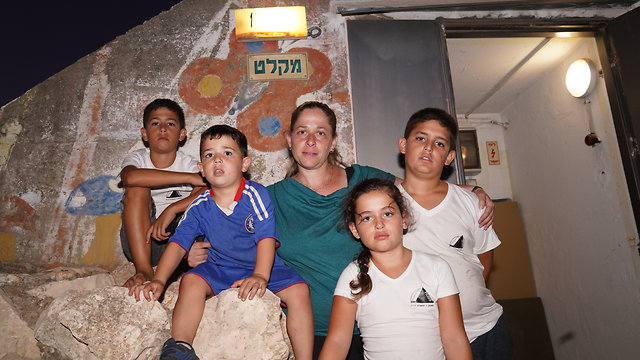 'Suddenly Hezbollah missiles were flying above us'

The Biton family of Moshav Avivim, which on Sunday was attacked by Lebanese terror group's anti-tank missiles, lost their father just two weeks ago; now the four young children and their mother are forced to seek refuge in their bomb shelter

Israelis living near the country’s border with Lebanon have found themselves on edge ever since the leader of the Lebanese terror group Hezbollah vowed to retaliate to alleged Israeli drone attacks in Beirut last week, unsure about the response’s scale or timing.

On Sunday afternoon, it finally happened. Anti-tank missiles were fired at an Israel Defense Forces base and at several military vehicles from Lebanon toward Moshav Avivim in the Upper Galilee. Israeli military responded to the attack by launching approximately 100 artillery shells at the sources of fire, fueling a small-scale border flare-up.

The Biton family outside the local bomb shelter

"I was hanging laundry outside, when suddenly a missile flew over our heads,” said Dvora Biton, a mother of four - Daniel; Tahel, Ariel and Yanay - who spent the afternoon in a local bomb shelter with six other families.

"I just picked up Daniel from kindergarten, the other kids came home earlier, because it was the first day of school. We live right on the border, and there were no rocket alert sirens, with everyone just running wherever they had to,” she said. “The military base in the moshav was on fire.”

Fire in the area of Avivim following a Hezbollah attack (Photo: AFP)

The Biton family went through a terrible tragedy two weeks ago after Dvora’s husband, 39-year-old Avishai who served in the Military Rabbinate, was killed in a car crash on his way to an education lecture in Jerusalem.

The experience has left Dvora’s daughter Tahel, who on Sunday started the second grade of elementary school, very upset. "The entire day was terrible,” said the eight-year-old. “I lost my dad two weeks ago and now we're sitting in a bomb shelter.

Tahel, however, remains defiant, saying although the situation isn’t “easy,” she is “not afraid.”