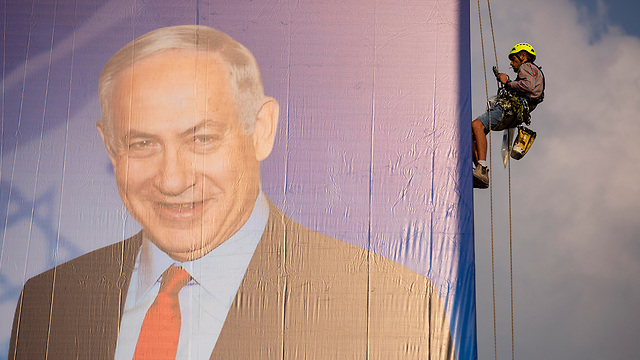 Analysis: With only a week to go until the elections, Likud appears to be neck-in-neck with its main rival, the Blue and White party, prompting the PM to make desperate moves like announcing annexation of Israeli settlements; but will it pay off or end his decade long dominance?

Israelis vote next week for the second time in less than six months in a election that could see Prime Minister Benjamin Netanyahu win a record fifth term - or end his decade-long dominance of Israeli politics.

He faces new and formidable challengers to his reign and, after the vote, possible criminal charges in three corruption cases. Recent polls have shown Netanyahu's right-wing Likud party tied with the centrist Blue and White. They also show that neither party will secure an outright majority.

Here are a number of possible scenarios for how the September 17 election could play out:

Likud, together with the three right-wing and religious parties that have already declared their support for him, win a majority. With at least 61 lawmakers, Netanyahu would have relatively little trouble assembling a coalition similar to his outgoing cabinet, which supported his hawkish position on Iran and its 2015 nuclear deal, and took a tough stance on the Israeli-Palestinian conflict. In the run-up to the election Netanyahu has vowed to annex the settlements Israel has built in the West Bank, emphasizing the area of the Jordan Valley. Such a move would delight Netanyahu's far-right allies.

After election day, Israel's president consults with party leaders, asking them who they would support for prime minister. President Reuven Rivlin then asks the candidate he believes has the best chance to try and form a government. Netanyahu had his opportunity after the previous election in April, but failed within the allocated 42 days. Rather than risk Rivlin appointing someone else to try, Netanyahu opted for a second election.

Netanyahu during press conference announcing Jordan Valley annexation (Photo: AP)
If he is again chosen, and again faces a stalemate, Netanyahu could go outside his bloc of right-wing and Jewish religious parties to form a so-called "national unity" government with those who are not his natural allies. That would likely mean his strongest rival, Benny Gantz, leader of the centrist Blue and White. But Gantz has said he would not join a Netanyahu-led government, citing looming possible corruption indictments against Netanyahu. But Israeli politics are famously fluid, with ever-shifting fealties.

If Netanyahu again fails again to form a government, his own party could oust him to pave the way for a governing coalition between Likud and Gantz's Blue and White, leaving Netanyahu in the political wilderness. So far, no one in Likud has publicly broached such an idea. But that could change if Netanyahu again comes up short in coalition talks.

If the centre and left-wing parties garner a majority in parliament, Gantz would head a government that could include his own party as well as the Labour Party and the newly-formed, environmentalist and secularist Democratic Camp, without needing an alliance with the right. It would be the first time since the 1990s that the left controlled parliament although, with an electorate shifting steadily toward the right, polls are not showing much likelihood of such a scenario. However if a left-leaning coalition were ultimately formed, it would likely pursue peace talks with the Palestinians and be more open to concessions toward them as part of a lasting peace accord. It could also be more accepting of the nuclear deal struck between would powers and Iran.

If no candidate can form a government, Israel would head to another snap election. But lawmakers are likely to do all they can to avoid a third this year.

HOW DOES THE ISRAELI ELECTION WORK?

The 120 Knesset seats are allocated by proportional representation to party lists. In order to win seats, a party must get at least 3.25 percent of the national vote, equivalent to 4 seats. In the election in April, Likud and Blue and White came out on top, tied at 35 seats each. No one party has ever won an outright majority of the 120-seat Knesset (parliament) in 71 years of nationhood. This makes post-election coalitions the key to victory, and negotiations can stretch on for weeks.

According to the polls, it's Avigdor Liberman, Israel's hawkish ex-defense minister. Polls suggest the ultra-nationalist settler will double his seats from five to around 10. Liberman, head of the Yisrael Beytenu party, has said he would only join a unity government comprised of Likud and Blue and White. However, Liberman is something of a wild card and has made unpredictable moves in the past.

WHAT ABOUT NETANYAHU'S LEGAL WOES?

Attorney General Avichai Mandelblit, who has announced his intention to indict Netanyahu in three corruption investigations, is expected to decide whether to formally charge him by the end of 2019 after a pre-trial hearing in October, during which Netanyahu, who denies wrongdoing, can argue against indictment.

Attorney General Avichai Mandelblit (Photo: AP)
A majority in the Knesset could grant Netanyahu immunity from prosecution until the end of his term. Some of his prospective allies signalled they would support such a move, but it would probably draw a public outcry and legal challenges at the Supreme Court. Yet even if indicted, Netanyahu would not be under strict legal obligation to step down. His right-wing and religious allies are not expected to pressure him to resign, even if he is charged.

WHAT ABOUT TRUMP'S "DEAL OF THE CENTURY"?

Netanyahu has said he expects U.S. President Donald Trump to release his long-delayed plan for Israeli-Palestinian peace soon after the election. If Netanyahu wins and forms a right-wing cabinet, he would have a hard time getting his far-right allies to sign on to any peace plan involving concessions to the Palestinians.

This could either destabilize the government or bury the Trump plan. A cabinet with Gantz in it would likely be more open to give-and-take negotiations with the Palestinians.