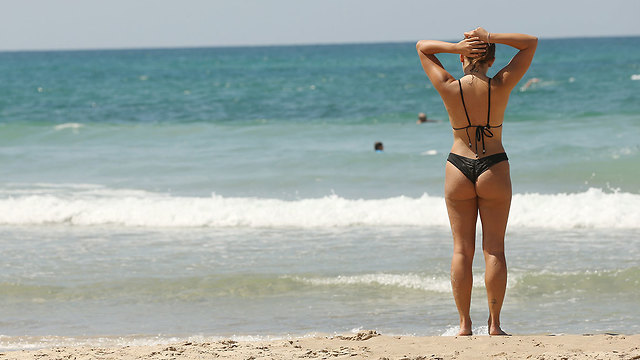 Thousands of people fill up local malls offering special sales to boost revenue, as well as the country's sandy shores, parks and nature reserves as Israeli public takes advantages of the special day off as politicians battle it out for their vote

As Israeli politicians battle it out in a last ditch effort to win over voters, the public took advantage of the warm weather to use Election Day, a national holiday, to visit local beaches, shopping centers and nature reserves.

The polls opened across Israel at 7am on Tuesday morning as 6,394,030 eligible Israeli voters began casting their ballots for the second time in six months on the makeup of the 22nd Knesset - and the prime minister who will lead it.

Woman enjoys her Election Day on a beach in Haifa (Photo: Elad Gershgoren)

Shopping centers came out with promotional campaigns to boost revenue, being aware of Israeli customers’ propensity to shop during days off.

In addition, those opting to work on Election Day receive bonus pay on top of the regular wages.

“During the previous elections, five months ago, our daily revenue was three times higher than an ordinary shopping day,” said the manager of a Nautica store located at a mall in Rishon LeZion. “We are prepared for the high numbers of customers and have specials Election Day sales.”

Beaches across the country were also full since the morning hours, with visitors struggling to find parking spaces and spare chairs and sunbeds.

Yossi and Aliza Nona from the central city of Rehovot drove all the way to Rishon LeZion to find a spot on a local beach. "We got up early in the morning and immediately went out to vote,” said Yossi, without mentioning who the couple voted for. “Now, we can rest and enjoy the sea and the day off. I urge everyone to vote, and only then to go to the beach.”

Some chose to spend their day off barbecuing in local parks and strolling down the nature reserves, with some 130,000 visiting local natural reserves and national parks.

"I hope the day off will increase voter turnout,” said Meir Dotan, barbecuing at Hayarkon Park in Tel Aviv. “We voted and we then came here to have a barbecue. We are an economic powerhouse and anyone walking around the malls could see it. It says a lot about the Israeli economy."

Michael Farr, a Likud voter, also came down to the park and claims she will cast her vote later in the evening. "We took advantage of the day off to travel, from here we’ll continue to the Tel Aviv Port and then we’ll vote.

Hopefully the next election will be in four or five years."