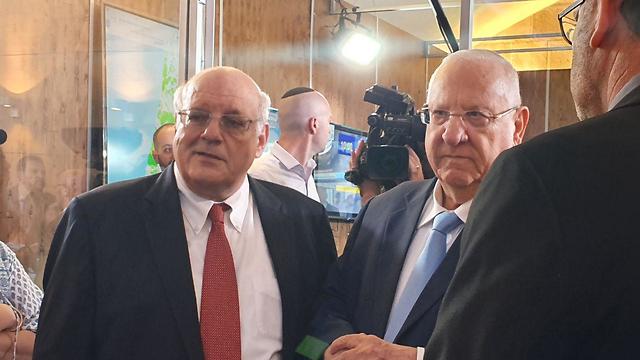 As exit polls indicate no clear winner, president says he will meet with party leaders once he 'receives clear picture of results, and as soon as possible'; vows to act 'in full coordination with the chairman of the Central Elections Committee'

President Reuven Rivlin said Tuesday night that he will press party leaders to quickly form a new government after exit polls showed no clear winner in parliamentary elections. Rivlin's office said that his nomination of a candidate to form the next government would be guided in part by the need to avoid a third election, after two votes in five months. It said he would meet with party leaders" after he receives a clear picture of the results, "and as soon as possible."

The president's statement said that he would act "in full coordination with the chairman of the Central Elections Committee, and once he has heard the position of all the factions he will take all considerations into account.

The president will be guided by the need to form a government in Israel as quickly as possible and to implement the will of the people as expressed in the results of the election, as well as the need to avoid a third general election."

As president, Rivlin decides who to task with forming a coalition government once polls close and the results come in. The leader whose party wins the most votes is traditionally the first person to be tapped for this job, and if after the period allocated for this mission they are unable to do so, the president is expected to turn to another leader.

However, faced with the prospect of another party forming a government when he was unable to cobble together a coalition after April's ballot, Prime Minister Benjamin Netanyahu's Likud party pushed through legislation to dissolve parliament and head for another national vote just weeks after the Knesset was sworn in.

Exit polls showed former IDF chief Benny Gantz's Blue and White Party winning slightly more seats than Netanyahu's Likud. But it appeared that neither would be able to form a government without Avigdor Lieberman's Yisrael Beytenu, which has said it wants a national unity government.

Rivlin vowed earlier Tuesday to do everything in his power to stop a third round of elections in Israel.

Speaking in a video in Hebrew posted on his Facebook page just hours before the polls opened at 7am, Rivlin also explained how he is empowered to choose someone to form the next coalition and the time constraints that this involves.

The video was produced as a public service announcement following a deluge of public inquiries was sent to Rivlin asking him to stop the second round of elections, after Netanyahu's failed attempt to form a coalition, and could be viewed as a veiled rebuke to the prime minister for calling another election.

The president said that if the appointed Knesset member cannot form a government, or if the Knesset passes a motion of no confidence in the newly formed coalition, he would have one of two options at his disposal.

His first option would be to tap another Knesset member, excluding the one who has already failed, to try to form a government.

The second option would be to inform the Knesset Speaker (Yuli Edelstein in this case) that there is no other choice but hold another round of elections.

A third option is possible, in which 61 Knesset members ask the president to give the mandate to a specific Knesset member. But this particular scenario never materialized after the last elections, as Netanyahu dissolved the Knesset so his main rival, Blue and White leader Benny Gantz would not be given the mandate by Rivlin.