Kippah worn by Asher Hazut who was struck by lightning 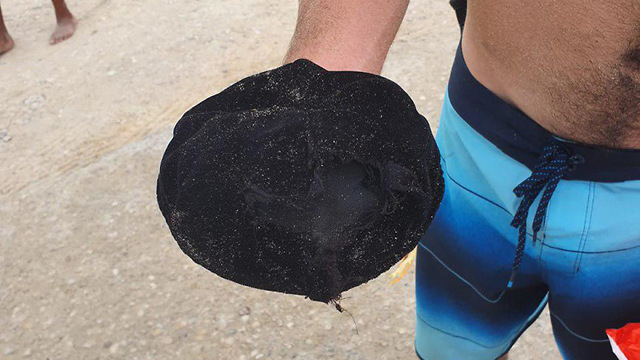 Officials at Barzilai Medical Center say the condition of 14-year-old Asher Hazut continues to be 'very serious'; condition of 4 other family members hurt in the incident has improved; 'We ask that you continue praying for our children's well-being,' says the mother

The condition of a 14-year-old boy who was critically injured when lightning struck a beach in southern Israel continued to be “very serious” Wednesday as doctors continue to fight for his life.

Asher Hazut and four of his family members were badly injured on Tuesday afternoon when lightning struck Zikim Beach near the city of Ashkelon where the family, from Be'er Sheva, had been enjoying the Sukkot break.

Kippah worn by Asher Hazut who was struck by lightning

Deputy Director of the Barzilai Medical Center Dr. Gili Givati said Wednesday morning that there is still an immediate danger to his life. “We are still fighting for his life,” she said.

Asher's 21-year-old sister-in-law was also seriously hurt in the strike, and three other family members aged 24, 17 and 13 suffered moderate injuries. Officials at the Barzilai Medical Center in Ashkelon said that overnight their condition has significantly improved.

“Another person who was seriously injured is also in the intensive care unit. Three others who have light to moderate injuries are recovering, talking, walking, and they are being treated in various hospital units."

"Our boys went out for the holiday,” said the mother of the teenager. “When the thunderstorm began, they were getting ready to go back home and then the lightning hit them."

Elazar Hazut, who was wounded by a lightning strike (Photo: Matan Tzuri)

The mother said as a result of an electric shock Asher suffered from the lightning, all his body systems have been damaged.

"We are a people of faith who work as teachers in religious institutions, and we understand that we could not have anticipated something like this," the mother added. “This case proves to us how small a human is when faced with the powers of nature.”

“We’ve been getting encouragement from the entire nation of Israel and we ask that you continue praying for our children's safety.”

'My yarmulke was burnt'

"My brothers and I played on the beach, and then we went for a swim," recalled seventeen-year-old Hanan after the strike.

"Afterwards we were eating, and we saw lightning far off, and it began to get overcast, so we started packing our stuff. My sister-in-law started walking, and I suddenly woke up when Magen David Adom (paramedics) revived me. I looked for my yarmulke and it was burnt."

An ambulance at the scene of the lightning strike (Photo: Barel Efraim)

Jacques, a worker on the beach who witnessed the event, said he had never seen lightning so fierce.

"We felt a great lightning strike," he said. "It was unbelievable, a friend of mine said that someone must've been hit, I've never seen anything like it."

Another young man present on the beach at the time of the strike said: "There was suddenly huge lightning coming out of nowhere, I told my friends we had better leave when I suddenly saw a guy waving his yarmulke. I ran to him when I saw four figures lying on the beach and he told me to call an ambulance."

Maxim Proklov, an MDA paramedic who was at the neighboring kibbutz was called to the scene along with three colleagues.

"We had just finished a blood drive and were heading north when we were called to the scene," he said. "Three of the injured suffered burns, and we used a defibrillator to restart the heart of one of the women. Then we performed CPR on an additional casualty."