In recent days I found two words to hate – price tag. Once upon a time it used to be in the fashion context and pertained to expensive blouses I could never afford, yet now it’s much more painful, because the despicable term is linked to kippas and biblical excerpts, the materials comprising my faith. I too squirmed when I saw the demolition of the homes in Migron, even though in my view it would have been better not to build there illegally to begin with, as not to face such painful situations later on. Yet nonetheless, the people of Migron are my brothers. 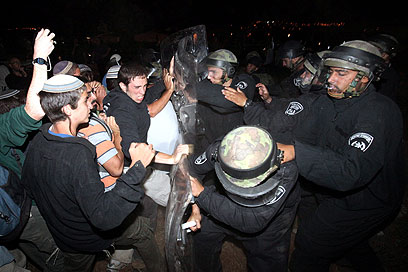 Demolition of Migron homes (Photo: EPA)
However, the ugly acts we woke up to the next morning, in the form of mosque vandalism and breaking into IDF bases, infuriated me, prompted a deep sense of withdrawal and suffocated any automatic sense of affinity. I find nothing Jewish in vandalizing the holy sites of other religions and I find no political benefit in attacking IDF soldiers or in dubbing commanders as “Nazis” and resorting to any other threats. My sentiments can also be found in the Torah, which never asserted that the duty to settle the land is above any other mitzvah (Rabbi Menachem Froman noted that the decree to protect converts and foreigners living in our midst appears in the Torah many more times than “Love thy friend as thyself.”) Psychologically speaking, those who resort to violence provoke violence against themselves; those who resort to hatred create a chain-reaction of hatred. Does the presence in Migron justify the trampling of any humane and humanitarian value?

Time to end the relationship

I’m well aware of the trampling of rights of Migron residents, and I’m also familiar with the discourse of hatred for the settlers that blame them for any negative phenomenon. I despise the people who fan the flames of this discourse; they are spiritual dwarfs and for that reason they need this discourse to present their political arguments, which are often justified. Yet now came the price tag people and positioned themselves at the same level as the haters and inciters, granting them the justification for their hatred on a silver platter.

Here, there is no room for condemnations in press releases anymore. Now, we need to take action. Just like in our personal lives, where frustration overcomes the promise inherent in a relationship, the time has come to part ways. The time has come to tell the price tag people, let’s end it. We shall not be a part of you. The fact that you and I keep the Shabbat, eat kosher and take pleasure in the Torah is no longer sufficient in order to live in the same ideological home. Perhaps we better use different names on the door too. We’ll be called “Religious Zionism” and you’ll be called “Fanatics.”


פרסום ראשון: 09.08.11, 20:42
commentsend to friendshareshare
See all talkbacks Close all talkbacks
new comment
Next
Previous
Warning:
This will delete your current comment
cancelOk