Ilan Grapel. To be released?

During visit to Cairo, US defense secretary says he urged Egyptian authorities to free US-Israeli dual national charged with spying for Israel. 'We're confident that ultimately the Egyptian government will deal with that fairly,' he adds

US Defense Secretary Leon Panetta called on Egypt on Tuesday to release a US-Israeli dual national who was detained in June on charges of spying for Israel.

Israel's defense establishment is willing to play apart in an swap deal which may involve releasing Egyptian detainees in exchange for Ilan Grapel, however no official negotiations have been launched.

Panetta's visit to the Arab world's most populous country followed speculation by Egyptian and Israeli media over the possible release of Ilan Grapel. Israel has denied Grapel is a spy.

"We have expressed concern about his treatment and have urged that ultimately he be released. And we raised that issue today ... in discussions," Panetta told reporters in Cairo.

"We're confident that ultimately the Egyptian government will deal with that fairly," he said, adding he was not involved in direct negotiations over Grapel. 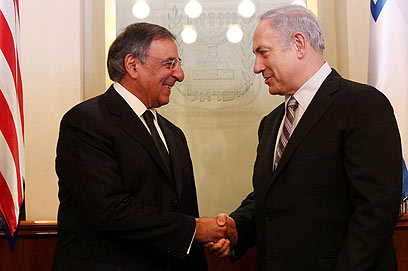 Egyptian security also denied there were any negotiations over the release of the 27-year-old.

Recently Egypt inquired whether Israel would be willing to release Egyptian detainees in order to help Cairo explain a possible release of Grapel to the Egyptian people. Jerusalem answered it was willing to do what it took, and asked to include Ouda Tarabin - an Israeli Bedouin man who has been convicted of spying in Egypt - in the deal. No talks have been reported.

Egypt is mainly seeking financial and military aid from the US as part of a possible deal. However, Cairo has denied any negotiations on the matter.

Before arriving in Egypt, Panetta said he hoped to "reaffirm our security relationship with Egypt" and that he encouraged Egypt's military rulers to move ahead with the election process.

Egypt's parliamentary polls will start on Nov. 28, beginning the process of handing power to civilians after former President Hosni Mubarak was ousted on Feb. 11 in a popular uprising.

Panetta also discussed regional security, including tensions between Egypt and Israel. Egypt became the first Arab state to sign a peace treaty with Israel in 1979 and has received billions of dollars in US aid since then.

Asked about the security state in Sinai, Panetta said he was concerned with attacks on pipelines supplying gas to Israel and said that more effort was necessary in improving the security situation in the region.

In September, Israel flew its ambassador to Egypt back home after protesters stormed the embassy building in anger over a border clash that killed several Egyptian guards in August.

The incident raised concerns about Cairo's future commitment to its long-standing peace deal with the Jewish state.

Ron Ben-Yishai and Roee Nahmias contributed to this report