A Molotov cocktail was hurled at a Jaffa synagogue Saturday evening, as tensions were rising in the central Israel town after two Arab cemeteries were vandalized over the weekend.

The firebomb hit the roof of the synagogue and did not cause significant damage. No injuries were reported in the incident.

Police officials arrived at the site and launched an investigation into the attack. 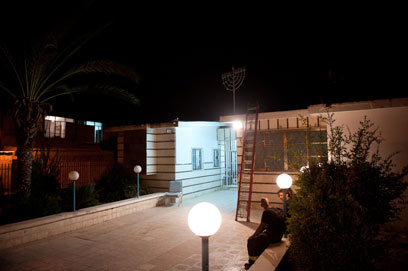 Speaking at the event, Knesset Member Jamal Zahalka (Balad) said: "We accuse the government of Israel."

The Arab MK called for imprisoning Foreign Minister Avigdor Lieberman on charges of incitement. "These little racists who come and spray paint a few slogans are much less dangerous than this dangerous government," he said.

"The distance between racist words and acts is horrifically short," Zahalka said, while slamming Shas spiritual leader Rabbi Ovadia Yosef, the settlers, and Lieberman."The little racists who burned the mosque in Tuba Zangaria and attacked the cemeteries in Jaffa have spiritual fathers in the government."

Referring to the string of recent attacks on Arab targets, the Balad MK charged that "a Jewish underground" is behind the vandalism spree. Chants at the rally included "Settler, stop now, you already crossed the line" and "Arabs against racism."

The Tel Aviv District Police Department has decided to deploy a large number of forces in the Jaffa area following the weekend's violence. The forces will attempt to prevent revenge attacks.

Police officials have held talks with community leaders in order to prevent an additional escalation in the area. "Our greatest fear is that there will be casualties and then everything will go up in smoke," the police officials said.

The police are not ruling out the possibility that the grave desecration was an act carried out by soccer fans as evidence in the area indicated. 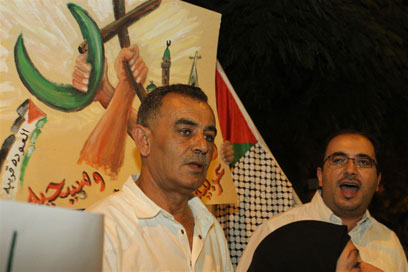 Security footage will most likely assist police in determining the exact time that the acts took place.

Meanwhile, a different police investigation team is looking into the case of the Molotov cocktail thrown at a Jaffa synagogue. In addition to the investigations, the police are putting a great deal of effort into calming the area by promoting deliberations between the various Jaffa factions.

The police are aware of the possibility that the next targets of extremists could be the many Sukkot set to be constructed in the city streets over the next few days, these acts could bring about another wave of violence.

A number of Arab-sector towns will convene an urgent meeting Sunday in order to organize a detailed plan to defend the places of worship.

Earlier, some 25 tombstones were vandalized at two Jaffa cemeteries belonging to Muslims and Christians. The messages “Death to Arabs” and “Price tag” were spray painted on the graves. Police later said that "Death to Russians" was another message painted at the site.

President Shimon Peres condemned the vandalism acts at Jaffa’s Christian and Muslim cemeteries, referring to them as “despicable acts that disgrace us and contradict the moral values of Israeli society.”

The president urged law enforcement officials to undertake the utmost efforts in order to nab the vandals.