Following Gilad Shalit's release in a prisoner swap with Hamas Tuesday, details are starting to emerge regarding the former captive's imprisonment conditions and medical state.

Initial tests showed that Shalit's general condition is better than expected. "I expected you to be surprised by my good condition," the former captive quipped while undergoing tests by military doctors. Officials said Shalit's nutritional state is also reasonable.

Shalit with IDF officers shortly after his release

The series of tests undergone by Shalit at the Tel Nof Air Force Base included dental x-rays and an ultrasound. No problematic findings were reported and his nutritional state was characterized as "under control."

Shalit was not asked and did not share with military officials his imprisonment terms or abduction circumstances. However, it appears that Gilad shared some of these details with his families.

Apart from his immediate family, the only person allowed into the Shalit residence is an army psychologist who will accompany Gilad as he attempts to go back to normal life.

Gilad will be undergoing dental and orthopedic tests in the coming days. A Medical Corps doctor and expert on shell-shocked victims will be at hand in Mitzpe Hila to provide Gilad with any care he may need.

He will be closely watched in the coming weeks and later be placed under the responsibility of the Defense Ministry's Rehabilitation Department. 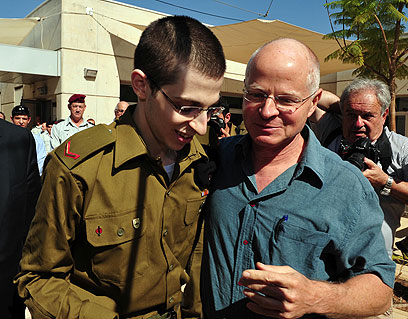 "He suffers from several light wounds that persisted as result of lacking treatment, shrapnel injuries and the implications of not being exposed to sunlight," Noam Shalit said. "He came out of some dark pit or dark cellar and encountered such commotion out here."

"Overall, Gilad said that in his first years he was subjected to tough conditions, but in recent years the treatment improved," the former captive's father said. He added that Gilad was able to listen to the radio and watch some television, mostly in Arabic.

Gilad Shalit referred to his imprisonment conditions earlier Tuesday in a forced interview with Egyptian television. He told the interviewer he was held in solitary confinement but saw some people and lived with them. "I knew all along that my family and many people in Israel are doing everything possible in order to release me," he said in the interview.