Palestinians freed by Israel in a trade for soldier Gilad Shalit took their morning exercise on Wednesday around a luxury swimming pool overlooking the Mediterranean, instead of circling the prison yard as they have done for long years inside.

There was none of the usual breakfast-room free-for-all at Gaza's 4-star Al-Mashtal beach front hotel. The 105 special guests, looking a little uncertain, lined up to shuffle around the breakfast bar one by one, canteen-style. 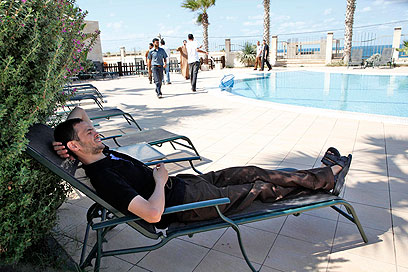 Did you bring your swimsuit? Luxury pool (Photo: Reuters)

"The first day of freedom feels like being reborn," said Salem Thwaib, a 30-year-old from Bethlehem who did 10 years of his life term in an Israel jail for helping a Hamas suicide bomber whose vest failed to explode.

Israel released 477 Palestinian prisoners including 27 women in the first part of a swap of 1,027 for Shalit.

A quarter went to the West Bank, 41 went into exile in foreign countries and the rest were brought to Gaza from Egypt, which mediated in years of exchange negotiations. 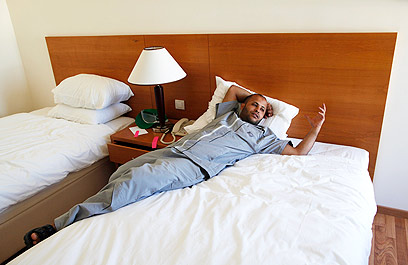 Ismail Haniyeh, head of the Hamas administration in the coastal enclave, authorized a grant of $588,000 for 294 freed prisoners in Gaza.