No reason to panic

A number of days have passed since Obama's reelection, and Israel can breathe a sigh of relief. The sun still shines here, and the American flag still flies on HaYarkon Street in Tel Aviv. Despite the fears and warnings, Obama did not sever diplomatic relations with us an hour after the exit polls showed he was going to win the elections, and it is safe to assume that when he spoke of vengeance last week he was referring to Mitt Romney, not to Benjamin Netanyahu.

The US president was obviously angered by Netanyahu's perceived support for Romney, but he'll get over it. He has to. A US president cannot let personal agendas come in the way of national interests. These interests have not changed since Obama's reelection and they will not necessarily change during his second term. Israel and the US need each other now just as much as they needed each other 30 and 40 years ago.
US Elections
New America defeats old America
Prof. Eytan Gilboa
Analysis: To avoid losing three consecutive elections, Republicans must recognize minorities' growing influence
New America defeats old America
The two allies cannot afford a long-running dispute, particularly at a time when Syria is going up in flames and the Egyptians are inclined to speak Farsi. Washington needs us more than ever before. Israel is the US' only anchor in this disaster area. It will not hurt us because Netanyahu backed Romney during the election campaign. In the 1970s and 80s the Americans also complained of Israeli intervention in the presidential elections, but they also intervened in our elections. However, they have always accepted the Israeli voters' choice. Congratulatory memos sent after the polls closed helped ease any tensions and marked a speedy return to the daily routine. 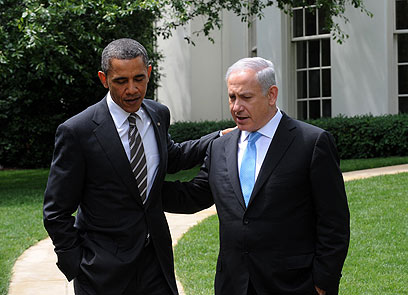 He'll get over it. Obama with Bibi at White House (Archive photo: Moshe Ohayon, GPO)

In other words, if anyone in Israel hoped that Obama would force Israel to divide Jerusalem just because Netanyahu's wealthy friend funded Romney's campaign, he may be in for a bitter disappointment. The issue of a strike in Iran will also be examined with presidential composure, regardless of the Israeli government's fondness for the Republicans over the past year. The personal relations between Netanyahu and Obama will not be a factor in how the US handles the Iranian nuclear threat.

But even if the tense personal relations will have an impact on Obama's attitude toward Israel during his second term, there is still no reason to lower Israeli flags to half-staff. The State of Israel can argue with an American president and continue to exist with dignity. We are not a banana republic, as Menachem Begin told the American ambassador at the time. Since then, Israel has only grown stronger and less dependent on others. If anything, it is the Americans who have become weaker. Any expert on US affairs will tell you that America of 2012 is not the America of old. Obama will be able to force diplomatic solutions on Netanyahu only if the Israeli premier allows him to.