The recent passage of the UN resolution upgrading the status of Palestine to de-facto statehood sent a strong message to Israel. The message was actually sent by Mahmoud Abbas, but he used the United Nations to send it. What's the message? He has scuttled direct negotiations without preconditions, and has chosen to have a settlement imposed on Israel instead.

Let me explain: Prior to going to the UN, if Abbas maintained direct negotiations with Israel he knew he would be required to recognize Israel as a Jewish state as part of any peace agreement. Since he is on record of never accepting Israel as a Jewish state, he knows Netanyahu would reject any deal without Abbas changing his position. Thus, he chose a new strategy by thumbing his nose at Israel and going to the soft audience at the UN, which is well known for being no friend of Israel. There he got just what he wanted - worldwide recognition of Palestine, without having to alter his position on rejecting Israel as a Jewish state.
Anti-Israel Resolutions
Hunting season
Hagai Segal
Op-ed: PA closely following Israel's response to European condemnations over settlement building
Hunting season

Thus, in spite of what some critics are saying about Israel, he is the one who stuck an arrow in the heart of the peace process by attempting to back Israel into a diplomatic corner on the strength of the UN resolution.

Ironically, he is now demanding the resumption of direct negotiations. From his perspective this makes perfect sense, since he now has the weight of the UN resolution to stand on. However, it includes language Israel is not about to accept. For example, it states Israel must return all pre-1967 land. This means giving up the Golan Heights, all of Judea and Samaria, and eastern Jerusalem, which includes the Old City, where the Western Wall and Temple Mount are located. Abbas knows he would not be able to get Israel to agree to this in direct negotiations, so he chose the weight of the UN to bring pressure on the Jewish state. 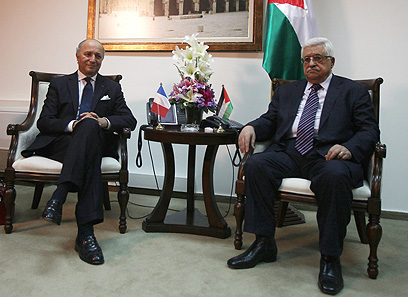 Aren't the diplomats criticizing Israel aware that Abbas chose the UN path so he could avoid accepting Israel as a Jewish state? If not, they should be. If they are aware and still criticize Israel, shame on them for rewarding bad behavior.

In order for the peace process to have any chance of success there are long standing issues of huge significance which need resolution. Aside from Abbas' refusal to acknowledge Israel's existence as a Jewish state, he says "there will be room for not a single Jew," if he gets his state. This suggests over 300,000 Jews currently living in Judea and Samaria will have to be ethnically cleansed. Yet we frequently hear he and others accuse Israel of being an "apartheid state." In reality, over one million Arabs live in Israel and enjoy all the benefits of citizenship. They own homes, property, businesses, have medical benefits, enjoy freedom of worship, they vote, and are excused from serving in the army. Not a bad deal. In light of this and his racist demand of a Jew free state, he is a hypocrite, and has no reason to be critical of Israel.

Another major peace process obstacle is his Fatah Party, which, along with Hamas and the PLO, has a charter which requires the destruction of Israel and subjugation of the Jewish people under Islamic rule. Why aren't the diplomats calling on Abbas to amend the Fatah charter and eliminate all references to destroying Israel? Surely no one expects Israel to strike an agreement with such language still in effect.

He also routinely names public places after terrorists who murdered Israeli civilians. Since 1948 over 3,000 Israelis have been murdered by terrorists. This amounts to almost one per week for the past 64 years. Is this conducive to creating an atmosphere of peace?

Peace will be achieved once Abbas and his Fatah Party alter their charter, recognize the 4,000-year Jewish connection to Jerusalem, accept Israel's existence as a Jewish state, abandon the right of return, and renounce all existing and future claims to Jewish land. These need to be part of an agreement which is reached through direct negotiations.

However, as long as Abbas and his party remain committed to Israel's destruction, and he is attempting to impose a settlement instead of negotiating it directly with the Jewish state, he not pursuing peace and needs to be held accountable. Unless you're spelling it p-i-e-c-e.