Future is in Jericho

Op-ed: UK envoy in Israel explains why his country invests so much in training Palestinian security forces

Last week I went to Jericho and saw the future. I spent the day with the Palestinian Authority security forces, seeing them train, hearing from their commanders, and talking to their Senior Leadership course.

The good news is that these are serious, professional, courageous commanders, committed to their task of keeping the areas under their control safe. They believe in their mission, and they are doing an increasingly good job. I have lost count of the number of times Israeli security professionals have told me of their growing admiration for the Palestinian security forces, and how much things have changed in recent years.

Stalled Talks
Settlements not main issue
Dan Calic
Op-ed: Abbas trying to divert attention from real Palestinian problems; Obama takes the bait
Settlements not main issue
The impact of the Palestinian Authority security forces has been positive on Israel’s security. The IDF has been able to pull back a large proportion of its combat troops from the West Bank. Last year was the first year in a long time that saw no Israelis killed by terrorism coming from the West Bank.

The Palestinian commanders I spoke to were clear that they are doing their jobs not for Israel’s security, but for the security of their own people. They know that Palestinians want to live in peace and security, free from crime and the threat of violence, just like anyone else. And, just like anyone else, they want law and order to be enforced by their own people, not by someone else. 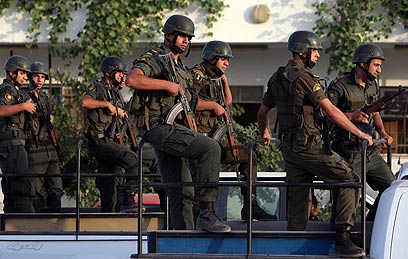 That is why the UK invests so much in training the Palestinian security forces. Under a US lead, and in co-ordination with many others, we have senior and experienced officers embedded in Palestinian training academies. When I am asked how the UK is contributing to the search for peace, this support is the best answer I can give.

Even better news is there are some straightforward ways that Israel could increase the effectiveness of the Palestinians security forces.

First, they could allow the Palestinians to police Area B in the West Bank. These areas, currently under Palestinian political control but Israeli security control, amount to more than a fifth of the West Bank. They are at present a haven for criminals. Both sides would benefit from having these areas brought under proper police control.

Secondly, the Palestinian security forces could massively increase their effectiveness if they were allowed to transit Area C. If transit routes could be agreed that allowed them to move around with a minimum of fuss and procedure, they would be able to deploy their forces where they could make a real difference.

But there is less good news. One concern is the state of the Palestinian Authority finances. The commanders said it was hard for them to fulfill their potential when their people were not being fully paid, and when they were not given money to pay for fuel for their vehicles. That is one of the reasons why the international community is so keen to put the PA’s finances on the strongest possible footing, including through automatic payments from Israel of the Palestinian taxes it collects on the PA’s behalf under the Paris Protocol.

But in the longer term, we worry that the whole mission of building the institutions of Palestinian statehood, like effective security forces, only makes sense for as long as there is a genuine, tangible prospect of that state being created. If all hope of this drains away, then it is bound to affect the popular legitimacy of the state-building project. This is one of the reasons why the UK, along with many others around the world, sees an urgency to the search for peace.