Obama: US credibility on the line in Syria response

In Stockholm, American president says world cannot remain silent after 'barbaric' chemical attack near Damascus. Putin: Congress had no right to approve use of force

President Barack Obama issued a blunt challenge to skeptical US lawmakers on Wednesday to approve his plan for a military strike on Syria, saying otherwise they would put America's international prestige and their own credibility at risk.

Using a visit to Sweden to build his case for limited military action against Syrian President Bashar Assad, Obama insisted that the international community could not remain silent in the face of the "barbarism" of the Aug. 21 chemical weapons attack he blamed on Syrian government forces.

Just a day before he travels to St. Petersburg to attend a G20 summit hosted by Vladimir Putin, Obama said he held out hope that the Russian president would back away from his support for Assad. But he stopped short of saying he had any high expectations for a change of heart.

Obama's comments came after Putin offered a glimpse of potential international compromise over Syria on Wednesday by declining to entirely rule out Russian backing for military action as he prepared to host a summit of world leaders. At the same time, Putin said any strike on Syria would be illegal without UN support.

Obama has taken a big political gamble by delaying military action in Syria and instead trying to convince a divided US Congress to grant authorization for a strike on government targets in Syria.

Aides say that even as Obama travels he will stay on top of the congressional debate raging back in Washington, where his national security team has waged an intensive campaign to ease the concerns of reluctant lawmakers and a war-weary American public.

While declaring that he believes Congress will give him approval, Obama ratcheted up the pressure for swift legislative action, saying inaction could embolden Assad to carry out further attacks.

"The question is how credible is Congress when it passes a treaty saying we have to forbid the use of chemical weapons," Obama said. 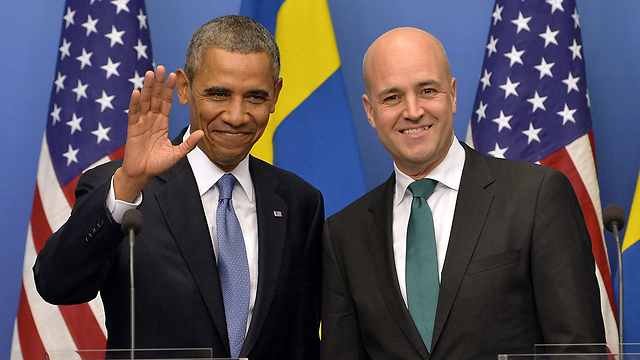 Obama declined to say whether he would proceed with a military strike even if Congress rejected the plan. But he said he was not required by law to put the matter before Congress and made clear he reserves the right to act to protect US national security.

Obama will fly to St. Petersburg on Thursday to take part in an annual two-day summit of the Group of 20 leading economies, a gathering sure to be dominated by tensions over Syria.

The meetings will bring him face-to-face with Putin, a key Syrian ally, the main arms supplier to Damascus and a staunch critic of the U.S. push for military action.

"Do I hold out hope that Mr. Putin may change his position on some of these issues? I'm always hopeful, and I will continue to engage him," Obama told reporters.

Syria tops the list of disputes that have sent US-Russian ties to one of their lowest points since the end of the Cold War.

Obama's three-day foreign trip offers a chance to lobby world leaders for their support and possibly shore up a shaky international coalition against Syria.

Britain, a generally reliable US ally, pulled out after a parliamentary revolt last week, but France, western Europe's other main military power, is still coordinating possible action with the Pentagon.

Any attack on Syria is likely on hold until at least next week, the earliest timeframe for a vote by lawmakers, who formally reconvene on Sept. 9 after their summer break.

Obama faces a tough fight in Congress for endorsement of military action over what Washington says was the killing of 1,400 people in a chemical weapons attack carried out by Assad's forces.

Many lawmakers staunchly oppose a strike, fearing it would entangle the United States in the seemingly intractable Syrian civil war. Others favor rewriting the use-of-force resolution the White House sent to Capitol Hill over the weekend so that it sets clear limits on any military action.

Still others, mostly more hawkish Republicans, want Obama to make sure any strike is punishing enough to weaken the Syrian military, and are calling for increased help for beleaguered anti-Assad rebels.

Putin said on Wednesday the US Congress had no right to approve the use of force against Syria without a decision from the UN Security Council, and that doing so would be an "act of aggression."

He said "anything that is outside the UN Security Council is aggression, except self-defense. Now what Congress and the US Senate are doing in essence is legitimizing aggression. This is inadmissible in principle."

In remarks that could raise tension further before he hosts Obama and other G20 leaders on Thursday, Putin also said US Secretary of State John Kerry lied to Congress about the terror group al-Qaeda's role in the Syrian conflict.

"They lie beautifully, of course. I saw debates in Congress. A congressman asks Mr Kerry: 'Is al-Qaeda there?' He says: 'No, I am telling you responsibly that it is not'," Putin said at a meeting of his human rights council in the Kremlin.

"Al-Qaeda units are the main military echelon, and they know this," he said, referring to the United States. "It was unpleasant and surprising for me - we talk to them, we proceed from the assumption that they are decent people. But he is lying and knows he is lying. It's sad."

Putin did not give any more details.

In an exchange with a senator, Kerry was asked whether it was "basically true" that the Syrian opposition had "become more infiltrated by al-Qaeda over time. Kerry said: "No, that is actually basically not true. It's basically incorrect."

In another sign of tension, the Russian Foreign Ministry issued a statement saying that since Aug. 31, the US State Department had repeatedly asked for a telephone call between Kerry and Foreign Minister Sergei Lavrov but Kerry had been unavailable and declined to set a time for the call.