Terror group that took over Nairobi mall also says security forces demolished the building 'having failed to defeat the mujahideen'. Kenya says forensic experts from United States, Britain and Israel to assist in investigation of attack

The terror group behind the takeover of a Nairobi mall claimed Wednesday that Kenyan government assault team carried out "a demolition" of the building, burying 137 hostages in rubble. A government spokesman denied the claim and said Kenyan forces were clearing all rooms, firing as they moved and encountering no one.

In a series of tweets from a Twitter account believed to be genuine, al-Shabab also said that "having failed to defeat the mujahideen inside the mall, the Kenyan gov't disseminated chemical gases to end the siege." It did not specify which gases, which could theoretically include anything from tear gas to poison.

Government spokesman Manoah Esipisu told The Associated Press that no chemical weapons were used, that the collapse of floors in the mall was caused by a fire set by the terrorists and that the official civilian death toll remains 61.

"Al-Shabab is known for wild allegations and there is absolutely no truth to what they're saying," he said. But officials said the death count will likely rise. Estimates varied between only a few bodies to dozens of bodies possibly still inside the mall. In another development, a British man was arrested in Kenya following the terrorist attack, Britain's Foreign Office said. The agency said in a statement Wednesday that British officials are ready to provide assistance to the man. Officials would not provide his name or details. He is believed to be in his 30s. Britain's Daily Mail newspaper said he was arrested Monday as he tried to board a flight from Nairobi to Turkey with a bruised face and while acting suspiciously. President Uhuru Kenyatta told the nation the night before the terrorists had been defeated and declared three days of national mourning beginning on Wednesday.

Esipisu said floors of the mall collapsed after a fire started by the al-Shabab attackers caused structural weakness in a 3rd floor parking lot, which then came down onto the second floor and brought it down onto the first, or ground floor. He said there were known to be eight civilians in the rubble, which were included in the government's official death estimate. There could be several terrorists also buried, he said.

At the mall Wednesday morning, gunshots could be heard. Esipisu said they were from Kenyan forces going room to room in the large Westgate Mall, firing protectively before entering unknown territory. "During sanitization once you take control of the place if you go to a room where you haven't visited before you shoot first to make sure you aren't walking into an ambush," he said. "But there hasn't been any gunfire from the terrorists for more than 36 hours." The Kenyan government said forensic experts from the United States, Britain and Israel would be assisting them in their investigation of the attack. "The mall is sealed off. It is a crime scene," Esipisu said. 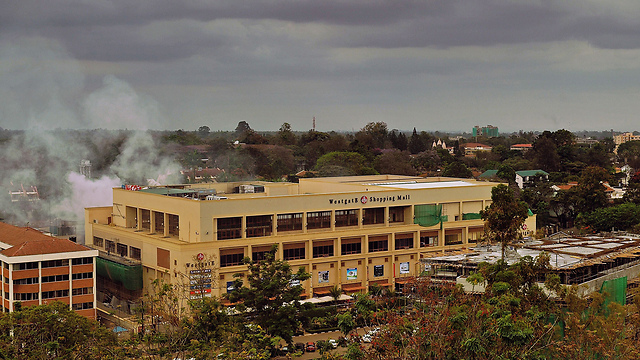 The process of retrieving bodies from inside the mall still had not begun Wednesday morning -- possibly indicating that the situation was not yet considered secure -- though a city morgue official said his workers were preparing to go into the building soon.

The attack claimed by Somali terror group al-Shabab killed at least 61 civilians, six security officers and five extremists, the president said. Another 175 people were injured, including more than 60 who remain hospitalized. Fears persisted that some of the attackers could still be alive and loose inside the rubble of the mall, a vast complex that had shops for retailers like Bose, Nike and Adidas, as well as banks, restaurants and a casino. A high-ranking security official involved in the investigations said it would take time to search the whole mall before declaring that the terrorist threat had been crushed. That official insisted on anonymity in order to discuss information not publicly disclosed. Eleven other suspects have been taken into custody, and Esipisu said: "At this at this point the interrogations are ongoing and I can't reveal any of the details." Al-Shabab, whose name means "The Youth" in Arabic, first began threatening Kenya with a major terror attack in late 2011, after Kenya sent troops into Somalia following a spate of kidnappings of Westerners inside Kenya. The al-Shabab extremists stormed the mall on Saturday, throwing grenades and firing on civilians. The group used Twitter to say that Somalis have been suffering at the hands of Kenyan military operations in Kenya, and the mall attack was revenge. "You could have avoided all this and lived your lives with relative safety," the group Tweeted Tuesday. "Remove your forces from our country and peace will come." The terrorists specifically targeted non-Muslims, and at least 18 foreigners were among the dead, including six Britons, as well as citizens from France, Canada, the Netherlands, Australia, Peru, India, Ghana, South Africa and China. Five Americans were among the wounded. The mall attack was the deadliest terrorist attack in Kenya since the 1998 al-Qaeda truck bombing of the US Embassy in Nairobi, which killed more than 200 people. Security officials in Nairobi always knew that Westgate, which was popular with foreign residents of the capital as well as tourists and wealthy Kenyans, was a likely target for terror attacks.