Hundreds of Iranians cheered President Hassan Rohani on his return from New York on Saturday after his historic phone call with US President Barack Obama but a smaller number of hardliners shouted "Death to America" and threw eggs and shoes at his official car leaving the airport, Iranian media reported.

While an anticipated handshake between Rohani and Obama at United Nations headquarters failed to materialize, they held a 15-minute call on Friday at the end of the moderate new Iranian president's trip for the UN General Assembly.


Iranian media said hundreds of Rohani supporters keen to see him make good on pledges of "constructive interaction" with the world to ease Iran's international isolation and get punitive sanctions lifted turned up to hail his UN visit.

But about 100 conservative hardliners also appeared and, shouting the "Death to America" slogan common since the 1979 Islamic Revolution, pelted his official car with eggs and stones in protest at Rohani's diplomatic opening towards Washington, according to witness reports posted on Twitter. 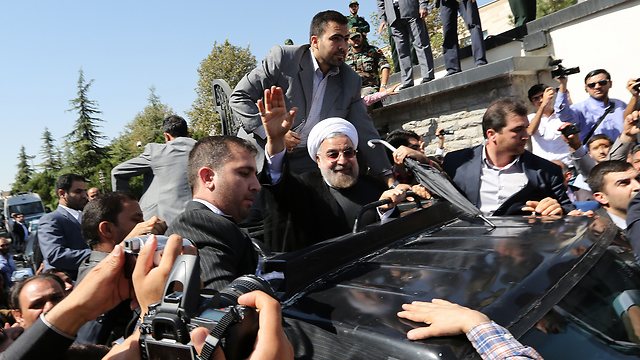 The semi-official Mehr news agency ran pictures of groups of protesters holding up a Death to America placard and banging the sides of Rohani's limousine as it began to depart the airport. Mehr said one protester threw his shoes at the car, a gesture of deep insult in the Islamic faith.

There has been little reaction so far from Iran's political leaders but one senior parliamentarian tentatively welcomed Rohani's conversation with Obama as a sign of the Islamic Republic's "position of authority". 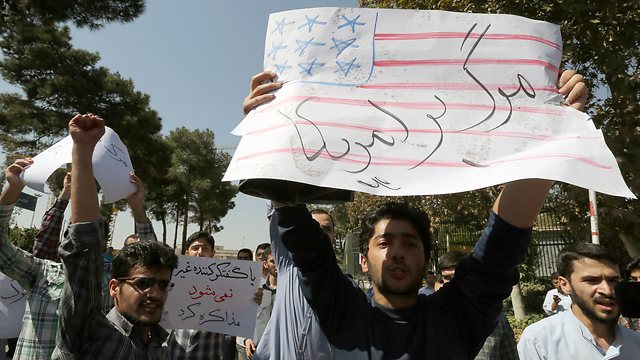 "This (phone call) shows that Iran's place in the world is of critical importance. That the president of America insists on a telephone call is a sign of sincerity," Mehr quoted the head of parliament's committee for national security and foreign affairs, Alaeddin Boroujerdi, as saying on Saturday.

The Iranian currency, the rial, climbed against the dollar on the open market by around two percent following the landmark phone call.

Rohani won election in a landslide last June, buoyed by many voters keen for steps towards moderation and reform after eight years of intensifying repression at home and isolation abroad under hardline predecessor Mahmoud Ahmadinejad.

But new high-level contacts with US officials at the United Nations were unlikely to have happened without the approval of Iran's clerical Supreme Leader Ayatollah Ali Khamenei, the polarised reactions on Rohani's return hinted at the challenge he faces in getting hardliners especially in the powerful security elite behind his conciliatory approach.

US officials said the phone call - which concentrated on how to resolve the standoff over Iran's nuclear program - was requested by the Iranian side but in comments to journalists after his return, Rohani indicated it was an US initiative.

The phone contact signaled a striking shift in tone between Iran and Washington, which cut diplomatic relations a year after the revolution ousted US-allied Shah Mohammad Reza Pahlavi and led to the U.S. Embassy hostage crisis. 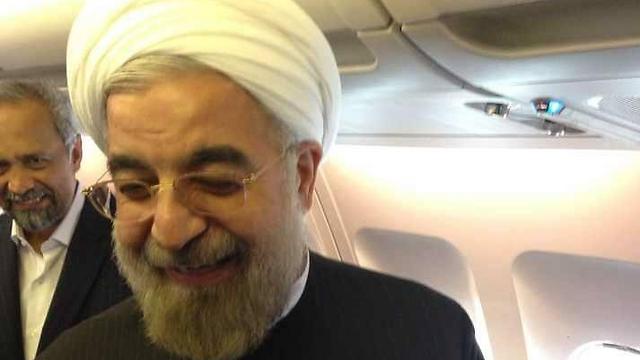 Rohani on flight back from New York

Obama has said for years he is open to direct contact with Iran while also stressing that all options - including military strikes - were on the table to prevent Iran building atom bombs.

The United States and its allies have accused the Islamic Republic of seeking to develop a nuclear weapons capability but Tehran says it is enriching uranium only for civilian energy.

Before leaving the airport Rohani told journalists that contrary to reports in Western media, he had not refused a meeting with Obama earlier in the week but there was insufficient time to coordinate it.

"To have a meeting between the presidents of these two countries there are many necessary steps. If this meeting had been compressed into the program, it would have been premature," the official news agency IRNA quoted him as saying.