Our excessive howls of anti-Semitism

Op-ed: Uproar over coverage of NY Hasid's murder shows trauma of anti-Semitism has taken over our minds in an irreversible manner

There is something about the word "anti-Semitism" which shuts the mouths of accusers in a pretty efficient way. Many times, the collective Jewish trauma justifies the feeling of permanent persecution accompanying our lives, out of a paranoia of survival we have developed as a defense mechanism.

True, we have suffered, and anti-Semitism is not dead. Thousands of years of hatred of Jews, the source of which is unclear, have left their mark on us, without finding the reason, or the diagnosis – or the ways to treat it. But still, one cannot shake off the feeling that we are too trigger-happy when it comes to anti-Semitism. We use this weapon in a disproportional manner, which at the end of the day harms us more than anyone else.

The unfortunate murder of the Jewish Orthodox businessman from New York last week, and the uproar which followed, prove more than anything that the anti-Semitism trauma has taken over our minds in an irreversible manner. Its symptoms are reflected in the cries of despair echoing through the public discourse even when there is no room for them, and the result is a world which looks at us awkwardly, and an erosion of the concept which has, as I said, significant justification. 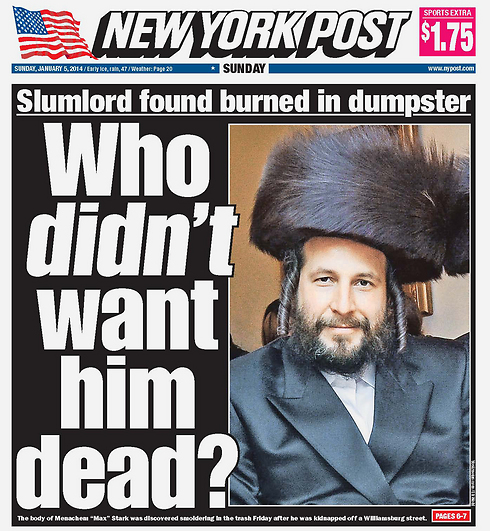 Are you sure this is an expression of anti-Semitism? (Photo: New York Post cover)

The details of the brutal murder of Menachem "Max" Stark are still unknown. Rumors are flying, leaking to the media in the United States, and continuing to produce headlines. And so it happened that the New York Post published an unflattering headline following an inquiry it conducted about the victim, which raised a dubious account of his businesses.

Among other things, the newspaper provided details on his alleged involvement in scams, on huge loans he failed to pay back, and on dubious ways of collecting money – and said that there were quite a few people who were not fond of the deceased, to say the least, and might have wanted him dead. This is not a claim that could not have been linked to any other criminal investigation, regardless of nationality, religion or race.

Time to be silent

The US Jewry – followed by the Land of Israel Jewry – was shaken, expressing rage, dismay and shock. The anti-Semitic demon was let out of the bottle to destroy us. For a moment it seemed as if the newspaper headline had taken us back to Kristallnacht, to the horrors of the Inquisition and to the 1648 riots against the Jews. It seems like we don't really need a modern Dreyfus to strengthen our beneficent sense of victimization, which helps us shake off responsibility and connects us to pogroms, to Polish landowners and to the good old stories.

It's very simplistic, and ridiculous, to wrap every criticism against us with "anti-Semitism," and to define every spit by a hooligan on the street or any journalistic insensitivity as "anti-Jewish." The Western media does not distinguish between a celebrity who has sinned and a disgraced politician, regardless of whether or not he has a shtreimel on his head, a tattoo or just a stocking hat.

And on the other hand, the Western world has learned a thing or two about racism, and the attempt to clear the phenomenon is underway at any given moment. But our excessive use of anti-Semitism weakens the real battle, and encouraged Holocaust deniers and those ignoring the phenomenon. There are enough incidents of hate crimes and of pure anti-Semitism which justify cries of despair. Our need to cleanse ourselves of any guilt under the argument of anti-Semitism is dishonest and wrong both in terms of values and image. It is first of all ruining our case. Sometimes it’s just better to be silent.

EDIT: The headline of this piece was edited for accuracy (January 15, 2014)