The return of the axis of evil

Analysis: After Syrian civil war created rift between Hamas, Iran, Syria and Hezbollah, Gaza conflict may be bringing them all back together.

Is Hamas making a public comeback into the axis of evil? Amid its disappointment at the stance taken by many Arab countries, particularly Egypt, in regards to Israel's Operation Protective Edge in Gaza, the Islamic movement is being embraced by its natural allies in the resistance axis – especially Iran and Hezbollah.

The relations between Hamas and its two natural allies cooled off after Hamas leaders spoke in favor of the Sunni rebels in Syria, as the Hamas members are Sunni as well, and against the Bashar Assad regime, which is supported by Alawites and Shiites. Iran is a mostly Shiite state and Hezbollah is a Shiite organization.

The Hamas leadership abroad, led by political bureau chief Khaled Mashal, left its headquarters in Damascus after the start of the civil war. The Syrian regime is showing no signs of forgiveness towards Hamas and Mashal, but it is taking advantage of the escalation in Gaza to divert the world's attention from what happening in Syria. 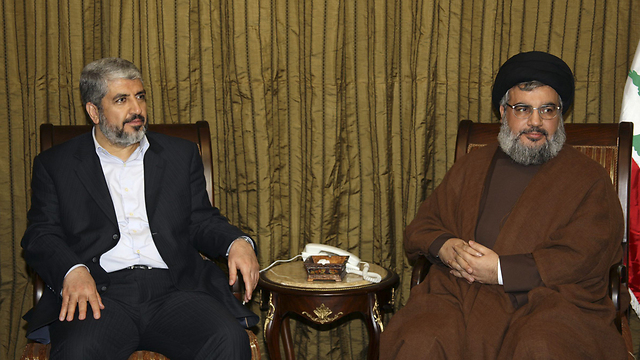 As he began his third term as president last week, Assad used his inauguration speech to mock the Arab states which are failing to help Gaza, calling on them to send weapons and fighters to the Strip just like they aided the rebels in Syria.

Iran and Hezbollah did not settle for declaring their support for Gaza, but made direct contact with the person leading the current battle in Gaza from Qatar, Hamas leader Khaled Mashal. Hezbollah Secretary-General Hassan Nasrallah, who has been monitoring the situation from Lebanon, spoke to Mashal and Islamic Jihad Secretary-General Ramadan Abdullah Shalah on the phone. He also met with Shalah in Beirut during Operation Protective Edge.

In these conversations, Nasrallah praised Hamas' performance, expressed his organization's willingness to cooperate against Israel and voiced his satisfaction at what he heard from Mashal, that the battle could lead to "the second victory of July." The first "victory of July," according to Nasrallah, was the 2006 Second Lebanon War. 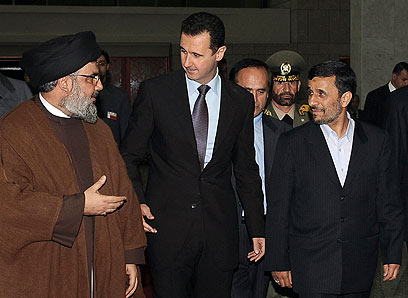 The conversation itself should not be taken for granted, especially in light of the fact that in the past few months Mashal has not been receiving much praise in Hezbollah's media outlets in Lebanon on the backdrop of the events in Syria and Egypt and Hamas' automatic link to the (Sunni) Muslim Brotherhood movement.

During Operation Protective Edge, Hezbollah's journal gave the credit for what is happening in Gaza first of all to the Islamic Jihad's military wing and only then to Hamas' Izz al-Din al-Qassam Brigades, although Hamas' military wing is clearly leading the battle.

Nasrallah, who is still rolling in the Syrian mud and losing fighters in the Syrian civil war as Hezbollah continues to aid Assad's army, hopes that the developments in Gaza will divert the fire towards Israel, at least in the intra-Lebanese arena. The first signs of that in the Lebanese arena could be seen in the united show of support for Gaza's residents by both pro-Hezbollah and anti-Hezbollah media outlets.

The Hezbollah-affiliated As-Safir newspaper has also detected this trend. According to the headline of one of its articles on the talks between Nasrallah, Mashal and Shalah, "Gaza is uniting the resistance." According to the Lebanese paper, the Islamic Jihad movement – and particularly its leader Shalah – is playing a key role in bringing Hamas closer to Hezbollah and Tehran in recent months. Shalah, unlike Mashal and his leadership, did not burn the bridges with the resistance axis following the events in Syria, but remained in touch with it. In addition to his conversation with Nasrallah, the newspaper reported, the Hamas leader has received as many as three phone calls from Tehran in the past few days – from Iranian Parliament Speaker Ali Larijani, from Iranian Foreign Minister Mohammad Javad Zarif and from one of the Revolutionary Guards commanders. Sources in Hamas' political leadership said Monday that Mashal had received another phone call from the Iranian foreign minister, who expressed Tehran's support and appreciation for "the Palestinian resistance" in the face of "the Israeli aggression." Mashal thanked Zarif and stressed that the Palestinian people were defending themselves against "the Israeli war machine." Sources quoted by the Lebanese newspaper said that before Zarif's latest call, the Iranian officials had expressed their willingness to aid Hamas in different ways in its battle against Israel. They also praised the performance of Hamas and the other factions and the "surprises" they had in store for Israel, which "restored the faith in Hamas' role." The newspaper further quoted knowledgeable sources who claimed that "the battle in Gaza plays a significant part in restoring the status of the resistance factions in Lebanon, Palestine and the region. It requires a new type of cooperation whose first signs are terminating the misunderstandings of the previous period and reuniting the resistance front based on Palestine being the key issue and Israel being the greatest threat to the region's Arab and Islamic people." A senior Hamas source told the newspaper that "the conversation between Mashal and Nasrallah is a very important step towards rebuilding the Arab and Islamic resistance front in the battle against the Zionist enemy."

Osama Hamdan, who is in charge of Hamas' international relations, addressed the issue in recent days, saying that "the relationship with Hezbollah and Iran today is much better than people tend to think. The relationship with Hezbollah is a few levels better than the optimists would expect. There is one enemy and it has one tactic. That is why an ongoing effort has been made to exchange knowledge. There is permanent cooperation and coordination on the ground." 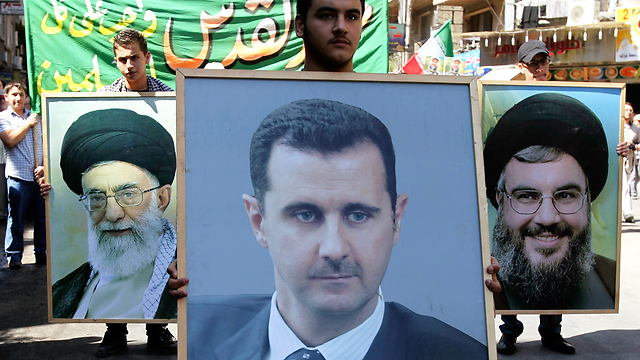 Sources close to the Hezbollah organization told the El-Nashra website on Tuesday that "we must not let the resistance in the Gaza Strip fall." They added, however, that in light of the current performance of the resistance in Gaza, there was no need for Hezbollah to join the battle. They also claimed that Hamas' military wing had never abandoned the resistance, even over the disagreement on the Syrian issue.

The same sources argued that the weapons being used by the Izz al-Din al-Qassam Brigades and the rockets they have in store were received after the beginning of the crisis in Syria. As for the conversation with Mashal, one of the sources said that "it's not that Hezbollah went to Mashal, it's he who came back to the resistance."

The building relationship between Hezbollah and Hamas has also been detected by Tariq al-Hamid, the editor of London-based Saudi newspaper al-Sharq al-Awsat, who is known as one of Nasrallah's strongest critics over Hezbollah's involvement in Syria.

In an article he published Wednesday, titled "Nasrallah smelled the blood," al-Hamid wrote: "Like a shark in the sea, the Hezbollah leader smelled the blood in Gaza and moved closer using his head, in order to take the opportunity to try to erase his Arab past stained with the blood of Syrians."

According to al-Hamid, Nasrallah sees the war in Gaza as an opportunity to polish the image of his bloodstained organization and an opportunity to attack the Egyptian stance and Egyptian initiative, which has gained international and Arab support.

"If Nasrallah's statements are sincere, what he should do is not open a front with Israel but only withdraw from Syria and leave its residents alone, instead of murdering the Syrians more brutally than the Israelis are doing in Gaza. It’s enough to say that the number of Syrians killed so far has crossed 170,000 people.

"Hezbollah's plan is clear. It wants to use the Palestinian blood to achieve its goal (improving Hezbollah's image)."