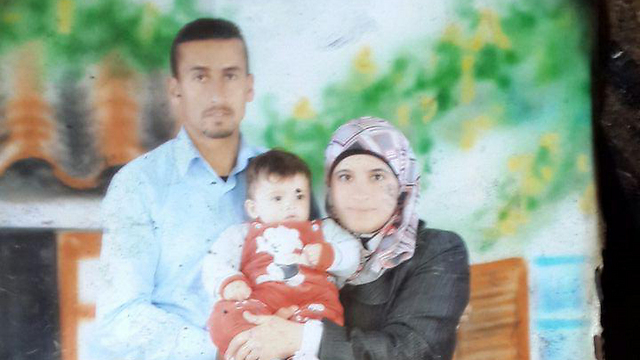 And little Ahmad remains all alone

Op-ed: Five weeks have passed since the Duma arson attack, which claimed its third victim Sunday, and the perpetrators have yet to be arrested. How much do Israel's security organizations really know about the activities of young radicals operating in wild outposts in the territories?

When I arrived at the village of Duma the day after the arson at the Dawabsheh family's home, I was led into the burnt house by the uncle of Saed Dawabsheh, the father.

I could still feel a strong smell of fire filling my nostrils and saw sooty and melted children's games and furniture scattered on the black floor. Agitatedly, the uncle told me how his son, Ibrahim, had heard Saed's screams from the balcony of his house and had rushed downstairs to see what was going on.

Outside the burning house he spotted Saed and his wife Reham, lying on the floor all burnt. The mother cried out, "Save Ahmad, save Ahmad," forcefully holding on to her consciousness. Since then, she had laid anesthetized and hooked up to machines in the hospital.

On Sunday night, Reham died of her wounds. Her husband died of his wounds at the Soroka Medical Center in Be'er Sheva four weeks ago, about a week after their house was torched.

Reham, Saed and Ali Dawbsheh, the three victims of the Duma arson attack. Out of a family of four, only Ahmad, the eldest son, remains (Photo: Hassan Shaalan)

The time that has passed since the murderous terror attack, which claimed another victim Sunday, raises a number of questions and thoughts: Five weeks have passed and those responsible for the attack have yet to be arrested. The Shin Bet and the Nationalistic Crime Unit at the police's Judea and Samaria Division say they know which circle the perpetrators came from, but in the meantime that only allows them order to issue restraining orders and administrative detentions, nothing more.

The Shin Bet and police are also investing human and technological resources in the investigation of Jewish terror. But the gap between the achievements in the Palestinian terror arena and the achievements in the Jewish terror arena raise questions on the amount of information the security organizations really have about what is going on among the group of young radicals hanging out and operating in the wild outposts in the territories.

Out of a family of four – two parents, a baby and a four-year-old child – only Ahmad, the eldest son, remains. Up until two weeks ago, he was lying in the children's intensive care unit at the Sheba Medical Center at Tel Hashomer.

Now, fully bandaged, only his face revealed, he is already getting out of bed, asking about his mother and father, wondering why they are not by his side. None of the family members has told him what happened yet. His big, black eyes are sometimes sad, and when they fill up with tears, one of the grownups wipes them for him, as his small hands are still bandaged.

This human tragedy is facing the sickening and outrageous reactions which have been posted online since the murder. They were joined by new horrible comments on Monday, after Reham's death, most of them by people who have no problem exposing their full names. The hatred is burning, and apart from President Reuven Rivlin, there is no relief. That's bad news too.