Prime Minister Netanyahu. One spin after another
Photo: Alex Kolomoisky 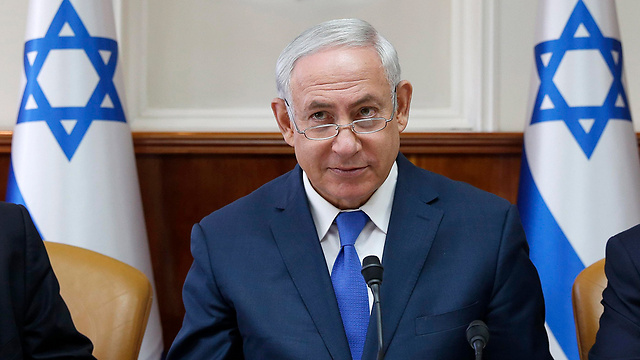 With Netanyahu, it’s all about political survival

Op-ed: The prime minister’s attack on the police chief and initiatives to shut down IPBC and advance the law granting a sitting premier immunity from investigations are all aimed at serving his own needs. Instead of resting on the laurels of a successful diplomatic weekend, he is busy lashing out at the police and the media and settling personal scores.

The events of the past few days strengthen the widespread notion that the more we approach the prime minister’s investigations, Benjamin Netanyahu will start loosening the brakes of the semitrailer he is driving on a mine-filled road.

Several weeks ago, I wrote in this column that if we want to know if Netanyahu is headed to elections or will maintain his government, we should look at the way the “French law” is being handled. The bill, which grants a sitting prime minister immunity from prosecution, will be voted on at the start of the Knesset’s winter session.

And here it is, the bill aimed at stopping the prime minister’s investigations. If the law is adopted, it will only be applied from the next term, but is there anything that can stop Netanyahu from calling early elections, even before an indictment is filed, establishing a new government and stopping the investigations against him? Does that sound groundless? Impossible? We’re talking about Netanyahu, ladies and gentlemen. When it comes to him, nothing is groundless.

Netanyahu. Inserting a knife into the heart of the ‘conspiracy he sees in his imagination, in which the police, the State Attorney’s Office, the attorney general and the media have all teamed up to oust him (Photo: EPA)

How is Netanyahu’s attack on Police Commissioner Roni Alsheikh, for allowing the alleged leaks from police investigations, connected to the new initiatives that were raised Sunday to shut down the Israel Public Broadcasting Corporation (IPBC) and to advance the law preventing investigations against a sitting prime minister? There’s absolutely no connection.

But when it comes to Netanyahu, there’s always a connection, even if it appears completely groundless at first. And it’s always aimed at serving the prime minister’s needs in some way: Diverting the public’s attention to a different direction, which is more convenient than the current issue on the agenda; creating some kind of media spin, for the family’s survival purposes; inserting a knife, a pitchfork or any other sharp object into the heart of the “conspiracy” Netanyahu sees in his imagination, in which the police, the State Attorney’s Office, the attorney general, the media have all teamed up to oust him. And all this is happening when there is nothing, there was nothing and there will be nothing.

On Saturday evening, after a Channel 2 report on his upcoming interrogations, Netanyahu rushed to attack the police chief over the leaks and didn’t forget to add the regular mantra about a media campaign against him.

It’s unclear what prompted Netanyahu to respond in such a manner to something that has been known for a long time now—that he would be summoned for questioning after the High Holy Days. Instead of resting on the laurels of the weekend, leveraging what he sees as a successful speech by US President Donald Trump on the Iranian nuclear agreement and the American decision to withdraw from UNESCO, Netanyahu chose to lash out at the police. How did his scolding of the police commissioner—not to mention Lior Horev, an external advisor to the police—do him any good? Why does a prime minister who is busy dealing with the nuclear threat, with the reconciliation agreement between Fatah and Hamas, have to engage in settling account with media advisors? Excuse me, but isn’t this issue a little out of his league? It’s quite possible that in the next support rally organized by Coalition Chairman David Bitan, alongside the attacks on his former employee Meni Naftali, the prime minister’s speech will also include smears against Horev. How many people were even aware of Horev’s existence until Saturday night? What a huge upgrade for Horev, what an embarrassing downgrade for Netanyahu.

Netanyahu and media advisor Lior Horev. How many people were even aware of Horev’s existence before Netanyahu decided to lash out at him too? (Photos: Alex Kolomoisky, Marc Israel Sellem)
One thing’s for sure: If Netanyahu’ had a media advisor like the late Shaya Segal by his side, none of this would have happened. A serious advisor wouldn’t let the prime minister turn his personal scores with people with no public standing into such a big issue. Who do you think they are, Segal would roar. But that’s what happens when your media advisors are your wife and son. It’s possible that even Netanyahu realized the mistake he made in his reckless response, which didn’t do him any good. And when it comes to Netanyahu, there’s always the option of sending a new spin into the air, a comment which will stir a row, an initiative which will be left on the cutting room floor. And with the help of Minister Aryeh Deri, who used to be the government’s responsible adult until recently and is now serving as Netanyahu's tow truck, he raised the issue of shutting down the IPBC, which immediately made it the top of the media’s agenda, pushing down the investigation leaks issue. The IPBC people really shouldn’t panic. First of all, because that’s what Netanyahu wants: Panic. This is another attempt to threaten, deter, show who’s boss. It won’t happen, and not because of Minister Moshe Kahlon’s objection. Netanyahu will simply have more urgent things to deal with in the coming weeks, including his own investigations and the recommendation to indict his wife. Furthermore, he has no motivation to clash with his finance minister, although Kahlon himself is much more prepared today to reach compromises with the prime minister. My bet is that this is just another impulsive comment sparking a media debate, which will die out within several days. Until the next spin comes along.