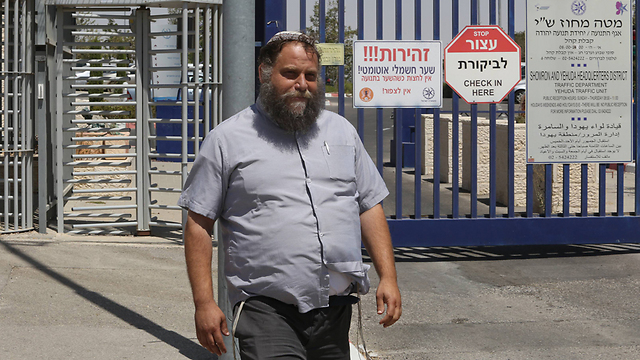 Lehava leader, other members arrested on charges of intimidation

Benzi Gopstein detained for questioning along with 14 others in overnight raid, suspected of threatening Arab men dating Jewish women; Gopstein's lawyer: 'It's possible that under the radical left-wing's pressure, the police are at their command, toeing the line and arresting Lehava members.'

Benzi Gopstein, the leader of radical right-wing anti-assimilation organization Lehava, was detained for questioning overnight Saturday along with a few other Lehava members on charges of intimidation.

The Jerusalem Police said Gopstein and 14 other suspects were arrested in a late night raid on the suspicion they threatened Arabs who were dating young Jewish women.

Police searched the suspects' homes in the Jerusalem area, central Israel, southern Israel and the West Bank and collected evidence linking them to the suspicions.

Lehava leader Benzi Gopstein (Photo: Gil Yohanan)
According to the police, there have been several cases recently of Lehava members assaulting and harassing Arabs in Jerusalem. Police further noted Lehava has been making efforts to increase their activities. "The decision to launch a police investigation and detain or arrest the Lehava members was done in an effort to put an end to (these incidents), while at the same time preventing further radicalization of the organization's members and stopping them from hurting others for nationalistic and racist reasons," the Israel Police said in a statement. Gopstein's lawyer, Itamar Ben-Gvir, tied the arrest to a court petition filed by the Reform Movement against Gopstein and Lehava. "It is possible that under the radical left-wing's pressure, the police are at their command, toeing the line and arresting Lehava members in an ostentatious display without bothering to summon them for questioning first," Ben-Gvir claimed.

Lehava members at Zion Square in Jerusalem (Photo: Ohad Zwigenberg)
Gopstein has been accused of incidents of racism and incitement quite a few times in the past. In November, Gopstein slammed Arab journalist Lucy Aharish and the rest of the Israeli media while waving a rag with Aharish's photo printed on it. "All these media rags, when we are in the government, we'll make them wash the floors," Gopstein told Ynet afterwards.

In 2014, Gopstein was interviewed on Aharish's morning talk show, telling her: "This isn't your country. You shouldn't be here."

Aharish told Yedioth Ahronoth after the incident: “The moment he left, I pushed my chair backwards, turned around and burst into tears. Why should I feel that someone hates me because of who I am? It’s like ISIS. Gopstein is like the garbage can of Islam.”

In September 2016, Gopstein and another Lehava member were arrested after disrupting a cultural event in Jerusalem in which Armenian and Christian choirs performed, among others.